Our flight to Christchurch was ridiculously short and uneventful. The plane landed on time at 4:30 pm. Once off the plane, I got a bag of Doritos at the airport, we picked up our bags at the carousel, and took a Supershuttle to Peppers Clearwater. We checked into our room at 5 pm. It was that fast.

I’m disappointed to admit that we had come to Christchurch just to stay at Peppers Clearwater again. Hayden had loved it so much the first time and we’d only stayed there one night. This time, we would be there two nights before flying home to Los Angeles. However, our stay was a lesson about leaving good memories unspoiled. Our short and sweet memory from two years ago should have remained just that.

The disappointment did not begin right at the start. Once again, we had booked a Lakefront Suite, and it was just as we had remembered.

There was bread waiting for us in the breadmaker. We’d checked in later than we had last time, so the bread had been sitting for awhile, but it was still good and the place still smelled of freshly baked bread. 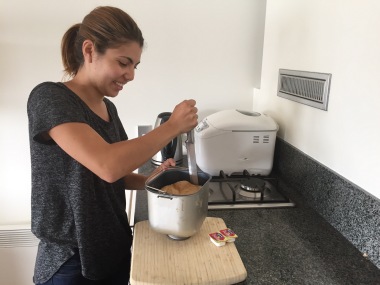 That evening, we had dinner at the restaurant. The food was good despite there being no pasta on the menu. Service was a little strange, with one waitress being quite New (“sorry that took so long, this is the first margarita I’ve ever made”) and the other being rather brusque and grumpy. But my margarita tasted fine, so I just ignored the service and enjoyed the food. I also turned my napkin into a crane. 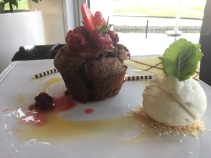 The couch was rather comfortable. The hotel gave us 500 MB WiFi access cards but that was it, so we had to use the real TV. The only “good” movie on was the original Fantastic Four, and it was just as mediocre as I had remembered. Why do they keep remaking that movie? Just give up already!

In the morning, we ordered room service and had breakfast in bed. That was quite good. I woke up and the food had already arrived, thanks to Hayden waking up to order it ahead of time. We started watching The Princess Diaries 2 over breakfast. After we were done eating, I decided we were going for a Pokemon walk and the movie sucked anyway.

We did a tier 3 Omastar raid, which was quite a lot more difficult than our normal tier 1 raids. Our failed Gengar raid had been tier 3. But after three tries, we successfully defeated the Omastar. We also wandered around the park area surrounding the hotel for quite awhile.

When we returned to our room in the afternoon, our key card did not work to get into the room. Hayden called reception and they brought us a new key, saying that sometimes the key cards can get demagnetized by cell phones. I’ve never had that happen before, but I shrugged it off as a minor inconvenience.

Inside our unit, the entire downstairs reeked of cigarette smoke. It almost smelled like someone had been smoking inside our room! We called reception and this seemed to be a regular issue, because they explained that there was an extractor fan in the half bathroom that could bring in foul-smelling air if someone was smoking next door or outside. They came by and sprayed around in the half bath and said they’d speak to our neighbors. It seemed that it wasn’t just someone smoking outside. The smell abated with all the windows and doors open, but our troubles weren’t over.

While at this point we had thrown away most of our leftover food supplies, the freeze dried Beef and Pasta Hotpot remained. It was supposed to be our lunch in case we got really hungry, since we didn’t want to buy 3 meals from Peppers in one day. As I became hungrier, I felt the Beef and Pasta Hotpot’s presence grow stronger, urging us to consume it.

I had a hot chocolate, the only free snack in the room, but it was not enough. I had a couple slices of the stale bread sitting on the counter. My stomach still rumbled. I was still not hungry enough to eat the freeze dried meal.

At 3:30 pm, I gave in and ordered room service, calling it an early dinner. The only movie playing was Hotel for Dogs, so I turned that on and we went on an adventure through a children’s movie that wasn’t very good to begin with. I’d thwarted the Beef and Pasta Hotpot!

As I said, our troubles were far from over. As late afternoon turned to evening, the stench of cigarettes filled the unit yet again. Even with the door to the half bath closed, the little air molecules leaked out and found their way to our noses and our lungs. We kept the windows open for a long time, but it was starting to get cold.

Hayden called reception yet again and asked if we could have a scented spray bottle just for us, to use throughout the evening, since it seemed that this smell was not going away. I had Hayden follow up with a request for more WiFi access codes, hoping that our complaints about the cigarette smell would at the very least give us more internet. They ended up giving us a password to a different WiFi service which appeared to be unlimited. The guy just quietly gave us the code without telling us it was unlimited or that it was in any way linked to our complaints, but we now had many internets. He also gave us a spray bottle and apologized that it seemed the message had not gotten through to our neighbors, but that there wasn’t much they could do about it.

We had room service dessert while watching La La Land, which I’d already read the plot summary for long ago. I knew that I wouldn’t like the ending, but the musical theatre elements were great. Hayden loved the movie, saying it really made him think about his life, and downloaded the soundtrack on Spotify afterwards.

Despite using the entire spray bottle trying to keep the smell at bay, the chainsmokers prevailed and the smell from evening to night only got worse and worse. It was now too cold to open the windows. The smell infected every room of the unit. Hayden shoved a towel between the half bath door and the carpet, but it was no use. We were in a sleazy motel.

I don’t know how someone could have smoked for that long, but the smell persisted for so long and with such force that it couldn’t have been just one little evening cigarette. These were chainsmokers.

The smell was best in the shower, when being bombarded by a lot of water. We went to sleep in our well-decorated motel, ready to go home.

After an expensive breakfast buffet at Peppers, we checked out. I think the receptionist knew well enough not to ask us how our stay was, because she didn’t. They could have at least offered us some compensation for enduring secondhand smoke for 24 hours of our stay. Alas, that did not happen and I will be leaving a detailed Google review.

Now we’re waiting outside on the deck behind the restaurant. Our Supershuttle comes at 1 pm and our flight is at 4 pm, so we had lots of time. There will probably be one more blog post covering our long flight home.

I’m excited for what’s ahead.

And without further ado, I present the Hall Report.

I pressed the room service button on the phone, and that had worked in the past. But this time, no one picked up for quite awhile, and then eventually someone picked up, but the person seemed really confused about my request. I wanted to let her know about our room still smelling like cigarette smoke and the fact that we needed more WiFi, in that order. She then tried to convince us that we weren’t staying at Peppers. We were in a different hotel.

Eventually we discovered that this was reception for a different Peppers in New Zealand. Not sure how that happened. Eventually I got ahold of the correct Peppers, and reception seemed very busy. I had three things to tell her, to all of which she responded “yes we will take care of that for you sir.” Her response didn’t make much sense to some of my concerns, such as that the reception button took me to the wrong place.

On top of all of this, it had been an hour since we ordered room service and we hadn’t heard anything. So not too long after that call, someone came down and gave us a spray to help with the smell, and unlimited WiFi. He seemed very apologetic and sympathetic to our situation, but there wasn’t much he could do to change things. They had already talked to our neighbors before about the smoking. Apparently there was this extractor fan in the half bath that just, wherever these people were smoking, it was going straight into that fan. And it seemed like they were smoking almost all day. And night.

For most of the time, we closed that bathroom door. I shoved, like, towels underneath the cracks to minimize the air that gets out. We opened up doors upstairs and downstairs and had a fan running to circulate the air. It helped a lot, but it made it pretty cold.

Oh oh, and there’s more. Later, we went outside onto the balcony to just enjoy fresh air and the view. But then… two units over from us, two women started smoking outside on their porch. And then I just hung my head, I was like “oh I give up, it’s too hard.” And then I got mad when I looked over later and those two women had a baby with them, like oh my god.

Also, if I’m going to complain, I might as well keep on complaining. There were these two glass doors leading to the toilet and to the shower. And they had this towel bar mounted to each glass door. And they were mounted in such a way that you could open the door in one direction only. If you open the door in the wrong direction, the towel bar smashes into the nice tile walls, only allowing it to open at, say, 15 degrees.

The towel bar was a bad call.

Also, the buttons to flush the toilet were as large as a dinner plate, it was ridiculous.

Should I say any positive things?

— Hayden, talent at the Hall Report

Don’t worry! While our New Zealand trip is ending, the Hall Report is not over just yet. We’ll be traveling through Michigan, Florida, and Hawaii in December, so there’s lots more left to review!

Hayden: The Hall Report is great. 🙂