The holiday park kitchen was a warm escape from the impending storm. Happy to have warm food, I gratefully slurped up my steaming cup of noodle. Our backpacking plans had been cancelled, and we’d need a place to stay after Taupo. Somewhere between Taupo and Martinborough might be good, to break up the long drive. I scoured the map on Airbnb, searching for a place.

It was the first place I looked at. A fully renovated and thoughtfully furnished vintage cottage, the feel of luxury saturating each image. After flipping through just a few pictures, I resumed browsing the other listings.

Hayden entered the kitchen and took over the search as I finished my cup of noodle. He looked at various listings, but we kept coming back to it.

In Mangaweka — a town I thought I’d never heard of before.

With that, I requested to book the place.

I said that I thought I’d never heard of Mangaweka. But I had. I’d read about it during my travel research, and Hayden and I had even marked it in our travel itinerary as a place to stop for lunch.

Beginning in Mangaweka, make sure to check out the iconic Main Street tucked away just off the main highway. This is a main road frozen in time – the perfect place take a stroll, and you’ll feel like you’ve been transported to the early 1900’s!

Since then, Mangaweka had been forgotten, swept under the rug. Until now.

Our Airbnb host had sent along driving directions:

Take first right just after the change of speed signs, the school is on this corner. Turn left and just around the corner we are opposite the fire station.

It was all as she had said. In Mangaweka, there was no grocery store, no gas station, and no place to eat in the evening. It was truly a small town, but not just that.

It was a ghost town.

As we drove past abandoned vintage buildings, I imagined my dad loudly saying “creepyyy” and then deciding he didn’t want to be there anymore. Just as I thought it, Hayden said “This is almost creepy.”

I felt creeped out.

“No, it’s not creepy,” Hayden continued to himself.

I felt a little better.

“You know, it kind of is creepy,” Hayden stated with finality. 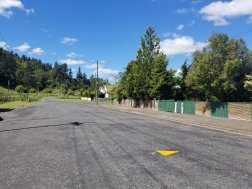 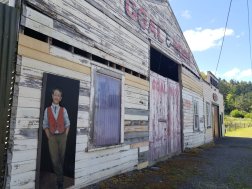 next door to Black Weka

We couldn’t figure out which building was our Airbnb for a minute or two, because all the buildings looked like shops. After walking up and down a bit and counting the numbers, I realized that this house was a shop, transformed into a house.

Black Weka is white and black, with a window display about Goldie, the infamous art forger born in Mangaweka.

The buildings were all adorned with similar, creepy, painted wooden people. And yet, the street was devoid of any real people. Where had they all gone?

I digress. We had found Black Weka. Our host had given us self-entry directions.

Please check for keys on a hook behind the painting of the man sitting in front of the house.

When we’d read this on our way there, Hayden and I had scratched our heads about the wording of the key’s location. What man sitting in front of the house?

Alas, we understood, and it was still uncomfortable.

I reached behind the man to take the key, hoping he wouldn’t snatch my arm and turn me into a painting, too…

Black Weka was truly luxurious. There was a den and a dining room at the front of the house, and a bedroom, bathroom, living room, and kitchen. The bedroom even had a giant bathtub in it. The entire house was decorated with art, most of it creepy like the rest of this town. Hayden and I focused on how beautiful the home was otherwise, but my dad was still in the back of my head stomping around making fun of everything. 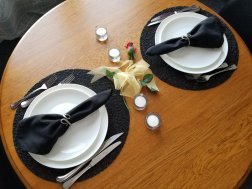 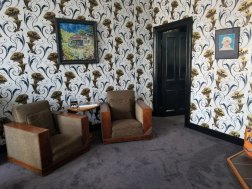 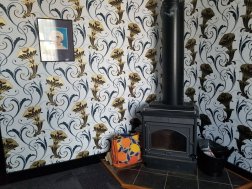 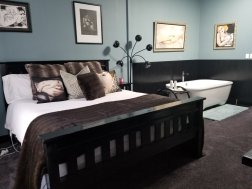 We had a small backyard, where a metal art man sat leering into the kitchen from afar.

We didn’t spend much time in the backyard.

The knife holder was being brutally stabbed by all the kitchen knives.

We found a Superman 1000 piece puzzle that we decided would be our goal for the evening. For dinner, we took our first try at fried rice, which turned out to be more like rice mixed in with soy sauce and vegetables. Hayden pouted and poured his Sabroso hot sauce all over it.

Though there was no wifi at this Airbnb, there were around 50 Blu-ray DVDs along with quite a nice TV setup. Many of the DVDs had 3D options, which the TV apparently supported, since there were 3D glasses on the coffee table. I hate watching things in 3D so we didn’t even try. This Airbnb had my movie taste, which included lots of action and adventure flicks.

Movie #1 was The Adventures of TinTin. Hayden and I furiously worked on the puzzle. Movie #2 was Abraham Lincoln: Vampire Hunter (i c u melanie). The puzzle was getting there. Movie #3 was Bridesmaids. The puzzle was almost done, save for the last several pieces comprising the completely black sky behind Superman. It was impossible to tell which piece went exactly where.

I willfully crammed the pieces in as Hayden wailed for me to stop.

I still don’t know what Black Weka means. Though we had stayed up perhaps too late, check out time was at noon, so we were able to sleep in a bit. We ate the very last of the oatmeal for breakfast and packed up the car. I insisted that we leave the puzzle piece intact, more out of laziness than anything. I did take the time to remove the pieces that I had shoved in, so that our host wouldn’t see that violence had been inflicted upon her puzzle.

We set off for Martinborough, where we would be staying at Peppers Parehua, our first Peppers of this trip.

The next day, I got a message from the host telling us well done on the puzzle.