As you might guess from the title of this blog post, our next few days did not go as planned. The drive from Ohakune to Whakapapa Village was only about 45 minutes. as we approached Whakapapa, we were surrounded by grassy fields and snowy mountains in the distance. Hayden asked if we could please come back here again someday, to which I replied, no, we were just going to do this once and then go on to do the other Great Walks. He complained.

It wasn’t clear where we should park to start the circuit, so we decided to just go into the information center and ask. I wonder what would have happened had we just started the circuit without asking.

I inquired about parking at information, and the woman asked me if I had seen the weather notice. I’d been looking out for weather warnings online for Tongariro, but I guess this one had popped up a bit out of nowhere. The woman remarked that it was “all this funny spring weather.” As the forecast was, there would be rain and winds as high as 90 kph on the next day, during the hardest section of the track. She said we’d just get blown off our feet.

I began to sense an element of danger, again.

She offered to try and send us the other direction around the track, which would help us miss the bad weather, but it turned out that that route was all booked up for our dates. She also suggested moving our trip back by a day, but we had Peppers ($$$) booked right after Tongariro, and there was no guarantee that the weather would clear up. There was still the possibility that the hut warden could send us back the way we came if the weather continued to be too dangerous.

With much sadness, we decided to just get our refund and try to find something else to do in the area. The woman at information suggested that we try walking the circuit from one direction to see the Tama Lakes today. Then tomorrow she said we could see if the weather would be good enough on the NEXT day to do the Tongariro Alpine Crossing, the most popular and difficult section of the track, also known as Mordor in Lord of the Rings.

Hayden would get his wish — we would be coming back here, after all.

In the meantime, we needed accommodation for the evening. Whakapapa has basically 3 places to stay, two of which being expensive ski lodges and the last being a holiday park. While the holiday park had cabins as well as cheap tent sites, the cabins were still pretty expensive and we were trying to still act like we were camping, so as not to lose all the money the Department of Conservation had just refunded us. We booked a tent site, parked, packed our day packs, and walked to the Tongariro trail head to hike to the Tama Lakes.

The hike to the Tama Lakes was meant to be a 5 hour roundtrip, so we figured it would take us about 4 hours with just day packs and our speedy walking. The first hour of the track was really easy, and we had a good view of Mount Doom looming over us. It was cool. Mount Doom is the big one. 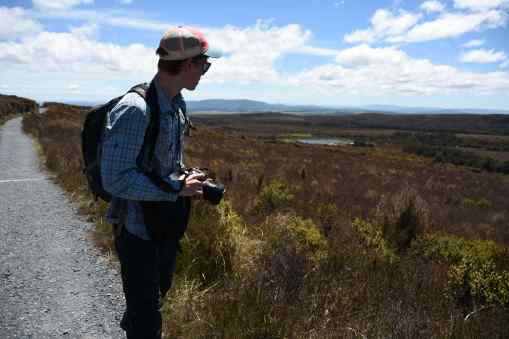 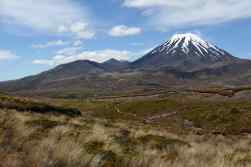 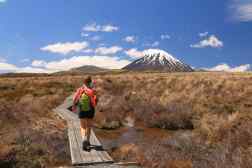 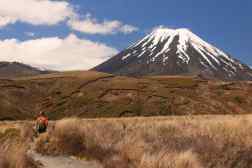 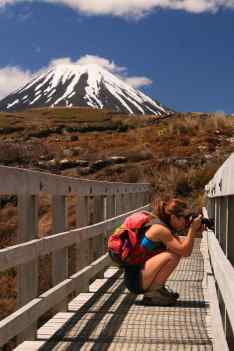 I noticed early on that blisters were developing on both my heels. These were the same hiking shoes and socks that I’ve always worn, so we tightened my shoelaces and hoped it would get better. However, it may have been too late…

The Tama Lakes are comprised of the Lower Tama Lake and the Upper Tama Lake. The lower is only 10 minutes off the Great Walk trail, while the upper is about 45 minutes off. I adamantly wanted to see both, which ended up being a great decision, because the lakes were really cool looking.

The trail to the lower lake was still easy and I ate my tangerines (2) at the lookout point. Hayden ate his apple (1).

The way to the upper lake was steep, gravelly, and extremely windy. We didn’t have great footing, but it was an okay climb.

The upper lake made for some great photos. Though we’d seen a number of people coming down as we were climbing up, there was no one at the top while we were there. It was a bit eerie. The stormy weather predicted for this evening hovered in the back of my mind, with the strong winds as a firm reminder.

I wished that I had left myself a tangerine (1) to eat at the upper lake. All the food was gone.

It was harder to keep our footing on the way back down, but it looked really epic. I think I’d bring a hiking stick the next time I come here.

On the way back, we took the Taranaki Falls Track, a different route that would take us back to the original trail head.

We reached the end of the track after 4.5 hours. At this point, my blisters were hurting pretty badly. I took off my shoes and found 2 gnarly blisters and 3 less gnarly but very present blisters. Oops.

Hayden and I made peanut butter and jelly sandwiches back at the campsite and set up the tent. I also made myself a nice, warm cup of noodle. Hayden said he didn’t want to camp anymore, for some reason, and we decided to find hostels and Airbnbs to stay in for the next two nights.

In the night, as forecast, it started raining quite hard. We were protected and warm in our tent and sleeping bags, but when we woke up, the tent looked very sad and dirty.

After an oatmeal breakfast, we packed up the tent for (hopefully) the last time and headed on our way to our surprise next destination, Taupo.