Nothing ever happens the same way twice.

The team woke up in the dark and left for State Square, where the race would commence. Sundae took its place 12th in the grid, and we waited until 8:30 for cars to start rolling out. I was driving solar car for the first shift, marking the last time I would drive a solar car. It felt like yet another milestone, creeping towards the end of my Stanford career.

The first shift was a little crazy, as expected, navigating through traffic lights and other solar car convoys and regular road vehicles. At one point, a helicopter came down low near me and caused a big gust, but our car was a rock. Lots of people, including solar car team media and random passersby, stood on the side of the road waving and taking photos. It was an Event.

Unfortunately, Sundae had a flat tire that eventually shredded, draining our battery pack significantly and causing an unanticipated stop on the side of the road to change the tire.

While I was driving, I kept wondering how long it had been and how close Katherine (the control stop) was. I thought about how this was my last time doing this and reminded myself to stay focused, to sprint through the finish. Sometimes I worry that I lack follow-through, and doing this was part of proving that I don’t.

The 4.5 hours passed really quickly and we were in Katherine before I knew it. I jumped out of the car and ran to the control stop tent, per the new regulations about control stops. And that was it!

I was chilling in scout for the rest of the day. We made it to the Daly Waters control stop right around 5 PM, meaning we would be serving our control stop period the next morning. Nuon and Tokai were gone at that point, but Western Sydney, Michigan, Punch, Twente, and Kogakuin were all there.

Mech had to work a bit before dinner, which wasn’t super great and kept us up later than ideal for race starts. The parents crew made us dinner and it was great. No more worrying about not having enough to eat! The team camped at the Daly Waters campsite and there were even showers! Hayden and I showered, since it’d be awhile since we’d get to again. Day 1 was behind us.

The team was told at the Daly Waters control stop that we would be serving our 30 minute penalty (for failing the figure 8) there. That sucked, but we’d seen it coming.

The next shift would be nearly 6 hours long since strategy, looking at our battery state of charge and the weather forecast ahead, wanted us to go slow. It was a long, boring shift. Kate, who was driving solar car that shift, was a trooper and stuck it out for all 5.5 hours. At one point, Kate casually mentioned over radio that she was eating her sandwich in the solar car. The entire convoy was like ??? you have a sandwich in there ??? and she was like, “yeah dude, 6 hour shift.” It was pretty funny.

The convoy reached the Tennant Creek control stop. Bochum and Eindhoven, both Cruiser class cars, arrived before and after us, respectively. Everyone always says that Challenger class is so fun because you get to go fast, but here we were, watching the Cruiser cars passing us! I stared enviously at the Cruisers.

I chilled in scout for the next shift and that was nice. The team camped at a rest stop, where Bochum was also staying the night. I was pretty exhausted from the night before, and conked out early.

Have you seen the Top Gear African Adventure episode? The three hosts choose beater vehicles, and if their vehicle breaks down permanently, they will be forced to drive the dreaded VW Beetle. The Beetle lurks in the background throughout the episode.

Well, it was like that with the Hertz. If our solar car ran out of energy, we would have to trailer the solar car. So there was Hertz, ever hovering, waiting. I had the sneaking suspicion that this was somehow a possibility.

The original plan was to make it all the way past Alice Springs by end of day. We reached the Barrow Creek control stop in the afternoon, and it was becoming clear that it would be a struggle to even make it to Alice.

The weather was worse than predicted, and the car was burning through energy and not making power under cloud cover. Then it started drizzling. We had to pull over on the side of the road a few times, the last time at 3 PM to charge for the rest of the evening. At this point, I was pretty sure we’d have to trailer, but others were holding onto hope that the weather would be okay. 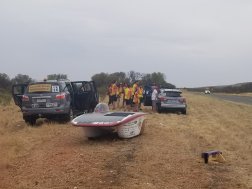 I woke up to thunderstorms, the tent flapping in the wind. Thunder! Lightning! It was peaceful, curled up in my sleeping bag. The rain fly isolated us pretty well from the wind and the tent flapping was all part of the storm. I fell back to sleep, knowing this meant trailering.

Though the rain died down to a drizzle by the time the sun rose, array standing did not help under the cloud cover. The solar car drove a whopping 20 kilometers before having to pull over to “charge” again. No one could really argue that we’d be able to make it to Alice Springs in time at this point, so the call was made to trailer. I don’t think it says too much about our car – the weather was horrendous, past anyone’s expectations, and we’d had a couple early setbacks. 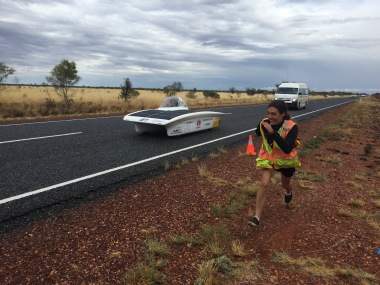 When we reached Alice Springs, we found out that the Alice Springs control stop deadline had been extended, and that we would be allowed to rejoin the Challenger class given that no one had told us about the new deadline. It was emotional whiplash, and I honestly wasn’t even happy about it. But we were back in Challenger, so we took the car out of the trailer and tried to charge under more cloud cover. 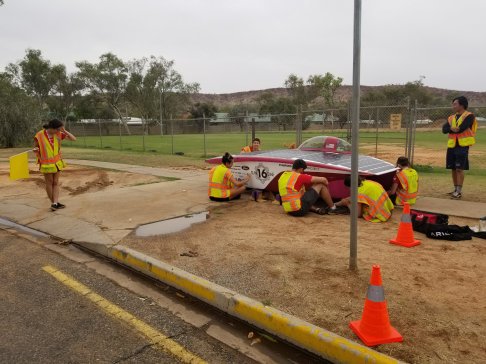 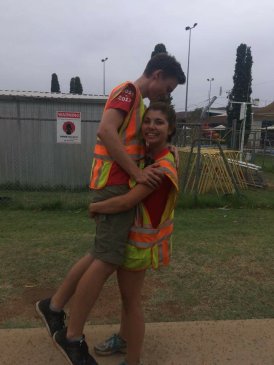 By a miracle, the sun broke through just out of Alice Springs and the car started to charge. The way out of Alice was chaotic. Towards the end of the day, we pulled over to charge, then decided it wasn’t worth it, and drove to the Kulgera control stop. The car screeched in just at the last moment. 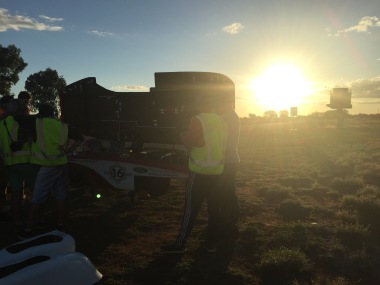 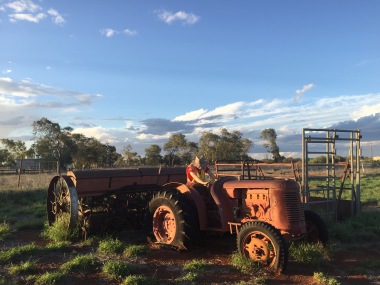 Hayden and the Kulgera tractor

That night, Hayden and I stayed in one of the budget rooms at the Kulgera campground. We showered and prepared for a few more days of no showers. I officially ran out of clean sports bras.

With the sun shining, the battery pack’s state of charge was in much better shape. We had a long shift to Coober Pedy, but we’d be going a tiny bit faster, so it would only be 5.5 hours. I joined Sarah in the Hertz for the long shift and had a great time. Apparently the solar car was doing well, too. For the second shift, I was in Chase and that was definitely higher stress but only for a couple hours. Then the uneventful day was over, and it really looked like we could finish the race. 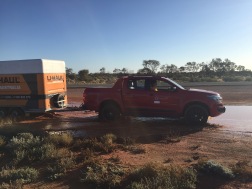 In other news, Nuon finished the race shortly before we even reached Coober Pedy. Oops.

I was in Chase for the first shift of the day, then ejected myself to the Hertz again with Sarah, then drove Lead on the final shift from Port Augusta to Adelaide.

The team knew we wouldn’t make it to Adelaide that night, and camped about 100 km from the finish line (awkward) at a pink lake. That was cool. 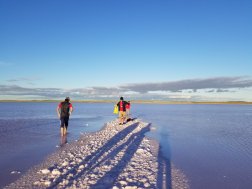 Sarah is dot in background

In the morning, tens and tens of millipedes showed up all over our tent and our stuff. That was horrifying. I refused to leave the tent until Hayden had flicked all of them off the tent. However, I still knew that there were likely more of them lurking in our things, waiting.

I had just 2 tangerines for breakfast and didn’t pack a lunch because we were going to be in Adelaide SO SOON. I moved my 7 Vodka Cruisers to the back of Lead in preparation for the celebration.

With our pack all charged up from the sun and only 100 km to go, I resumed driving Lead and the convoy blasted off at 90 kph for most of the shift. About 30 km from Adelaide, traffic started getting more dense and Lead kept getting separated from solar car by traffic lights. It was a rough time, but we safely made it to the staging area 1 km away from the finish line.

Parking was absolute chaos, as there was a fashion show going on where WSC affiliated vehicles were meant to park, and there was a huge line of solar cars at the staging area waiting to cross the finish line as well.

After an hour of waiting around, Chase escorted the solar car to the finish line. It was rather anticlimactic, after a whole hour of waiting. But whatever, we were there, yay. Vodka Cruisers were had. 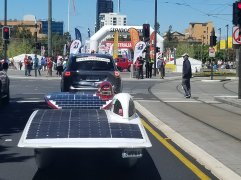 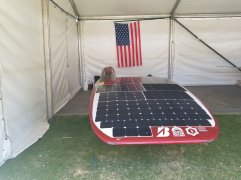 However, the work was not over, and a bunch of team members left to move the convoy vehicles to the pack down area and get everyone’s personal gear to the team’s hostel. It was to be a long day.

After getting gear to the hostel, Hayden and I took the red truck to pick up everyone’s personal gear from the storage unit. On our way back, we picked up Thai food and another 10 pack of Vodka Cruisers (it’s becoming my thing). We checked into our Airbnb apartment and finally took a second to relax. I took a shower and put on real people clothes. Despite waking up at 5 am, I was feeling pretty good.

The parent team hosted a dinner at the hotel Adina for the entire team, featuring an open bar tab on them. I ate food and drank fancy cocktails and everyone noticed that Gawan had shaved his beard. It should be noted that it wasn’t completely shaved off – I asked him, “Is that a #1 on an electric razor?” to which Gawan replied rather immediately, “4 MILLIMETERS.” It was a whole thing, I swear. Multiple people were surprised by Gawan’s new look.

Hayden and I hung out with Michigan people at the YHA hostel and then Belgian Beer Café and then the karaoke bar. It was fun and I came home exhausted. That night, I slept in a real home in a real bed!