In the morning, Hayden and I foraged for breakfast in Darwin and then went early to Hidden Valley Race Track to reserve a work space early. Last cycle, the team arrived too late to secure one of the sweet paddock garages, but this cycle we were just in time to get one. It brightened my day to unload all of the tool boxes from Lead into our new garage. It started raining as we unloaded, which only made it even better that we had a sheltered space to work. A few hours later, the rest of the team arrived with Sundae, and we began pre-scrutineering work. 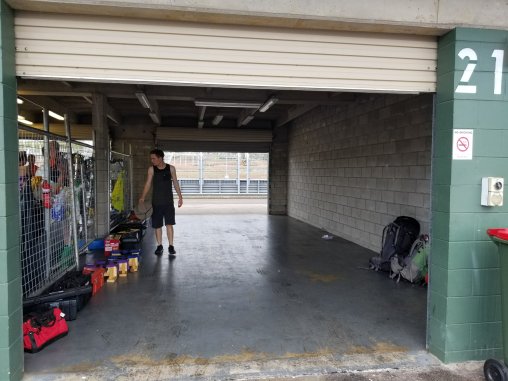 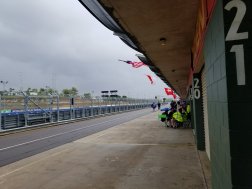 view from the garage

There were two full days of mechanical work to be done, and potentially only two days to do it before static scrutineering. We hadn’t yet been told on which of the three days we would be scrutineering, so we assumed it would be the soonest one. Mech team worked hard.

the tire is destroyed

There is actually a story behind the tires. We’ve noticed that the 2013 and 2017 cycle Michelin (solar car) tires have steel walls. But after destroying a set of 2015 tires at the Marla airstrip, I became skeptical of the existence of steel walls. I asked Sarah to hacksaw one of the 2015 tires in half, for science. A lot of people from other teams watched in confusion as she happily destroyed what must have seemed to be an extremely expensive tire. The result of the experiment was that there is only rubber and kevlar in the areas where the 2013 and 2017 tires had steel. Questions, questions.

But yeah. Cutting the tire in half was not in preparation for static scrutineering whatsoever. 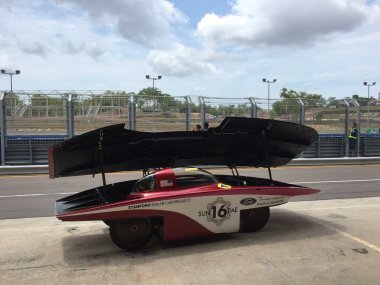 We learned that our static scrutineering appointment would be on the second day, Wednesday, so we had a whole extra day to prepare. The mech team, however, was determined to get some time off in Darwin, and toiled away to get all our things done in the originally planned timeline.

On Monday late afternoon, the mech team was pretty much done making the car race-ready on our end. We stopped at the grocery store to get food to cook for ourselves, as the team was staying in cabins at Hidden Valley Holiday Park.

Michigan was hosting an America BBQ down at their garage that night, so we came back to the track for that. I think all of the American teams were present, along with some random other teams that decided to join in on the fun. Maggie and I finally lit The Candle. We butted our way into the middle of the crowd of people and lit it there, where everyone stared at it for awhile. First, the candle starts out as a flower bud, and you light the middle of the bud. Then, the candle begins to rotate, singing as its petals open up. From The Fry’s Electronics.

Hayden boldly asked for a tour of Michigan’s semi, which they transport from the States all the way to Australia, full of all their tools and supplies. Michigan also hires an Australian driver to drive it. The semi is truly a thing of legend. A Michigan team member obliged, and we got to see inside. I had expected a big nap corner, but there was not one. There was an upstairs area with refrigerators and tool chests, a downstairs area with other supplies, and a place for their car in the back. It was pretty cool. We just have a rented U-Haul trailer.

Mech planned on the next day being a free day, potentially seeing saltwater crocodiles, going to the beach, and getting a Thai massage.