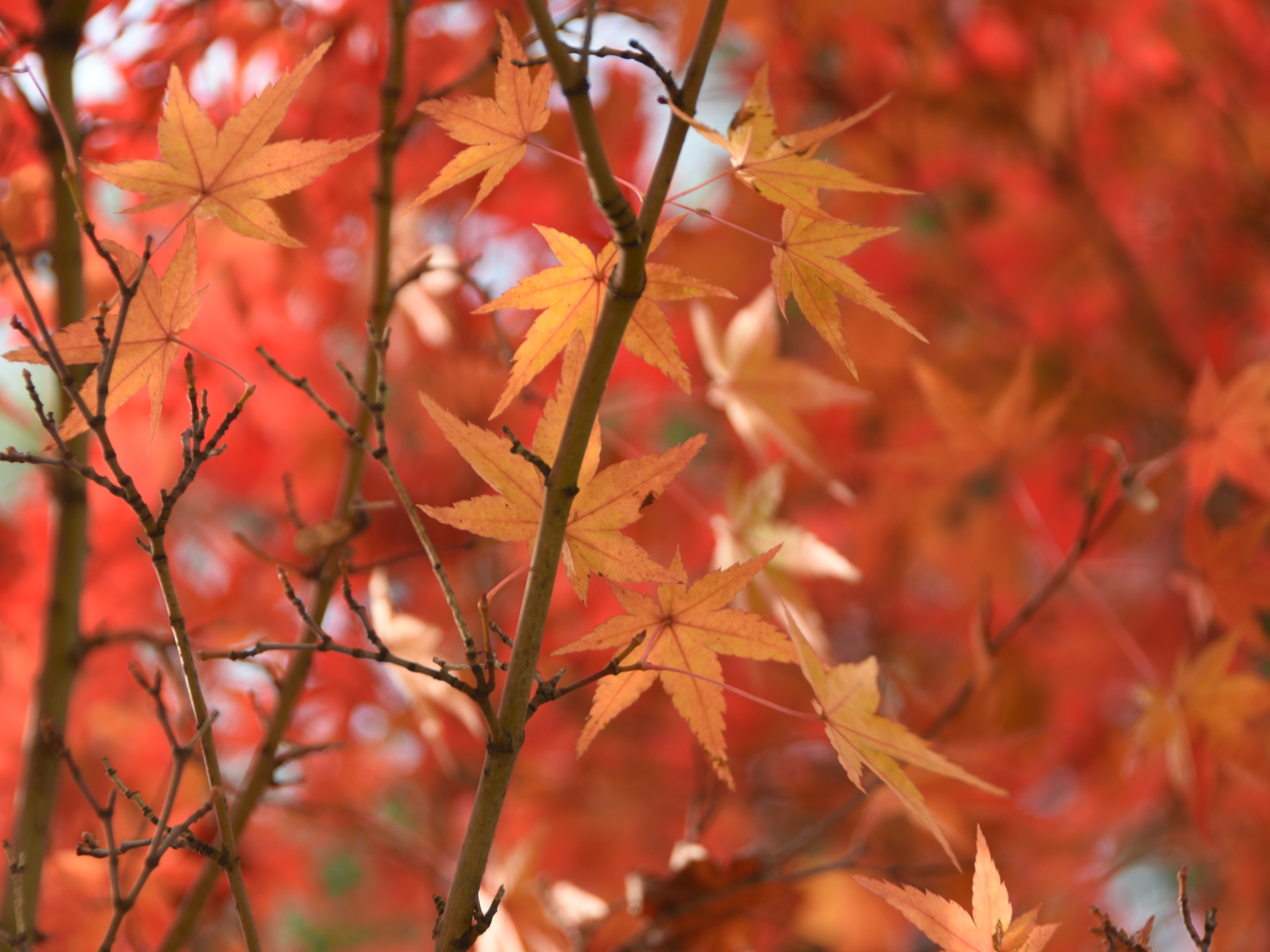 Hana Hotel Kyoto was not the most expensive or fancy of the hotels we had stayed at in Japan, but was the newest by far. The designs were very modern and clean. Hayden and I decided that the bathroom was the nicest we had seen — it still had all the taupe-colored fixtures, but it had one purple wall (whoa!) and real tile (how novel!) versus the ugly laminated stuff. The room also included tea packets in pink polka-dotted packages. All the other hotels had included free tea as well, but Hana Hotel put its free tea in a cute package. 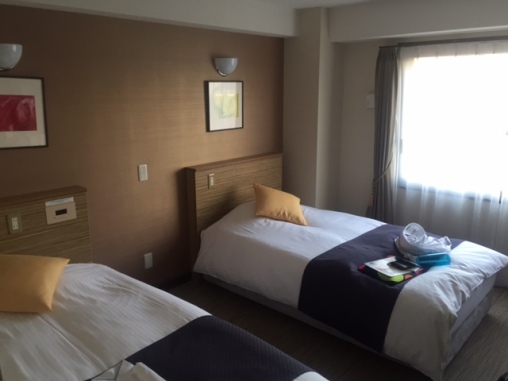 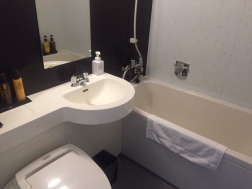 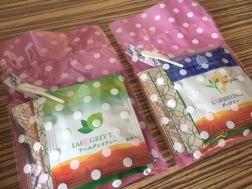 For our first dinner in Kyoto, we went to a cheap restaurant down the street from our hotel for an easy meal after another long day of public transportation. After dinner, we picked up chocolate ice cream at a convenience store and ate it at the hotel while watching more Friends.

Early the next morning, Hayden had a phone interview, probably to pay me back for all the times I had woken him up before sunrise for my interviews. I woke up to the sound of Hayden describing his qualifications in great detail. After his interview, we dragged ourselves out of the hotel for breakfast. We ate at Choice, a vegan and gluten-free hippy restaurant. We didn’t know it was vegan and gluten-free until we were already there, so we went for it and ordered smoothies and pancakes. The restaurant had super cool interior design, and the pancakes were good but definitely Not The Same as regular pancakes.

We were still pretty tired from Hayden’s early interview, so we went back to the hotel and hung around there through the afternoon. Hayden downloaded Minecraft Lite on his phone and had been playing it throughout the trip. Eventually, he got me hooked on the game and, that afternoon, we both ended up paying seven dollars for the full Minecraft. We stared at our phones playing Minecraft for more time than is socially acceptable.

Finally, after the weight of Too Much Minecraft set in, we set out to Downtown Kyoto, a short walk away from our hotel, to go shopping for souvenirs and presents. Downtown Kyoto contains Nishiki Market, a big conglomerate of little shops selling many different goods, both traditional and modern. Nishiki Market is very cute and we had fun walking through and browsing the Things We Don’t Need. We got donuts from a street-seller because the donuts were shaped like cats! At a bohemian-themed store, we found these cool Indian-made fabrics. I know we were supposed to be enjoying all that Japan has to offer, but instead we purchased these great products made in India. At a different store, I bought a yukata, because they were so comfortable and fun to wear in Shodoshima. Hayden and I also visited the Takashimaya Department Store, but found it to be too pricey.

On our way out of Nishiki Market, we found a temple just casually nestled in between big office buildings and shops. Later, we found out that the temple is called Honno-ji Temple. Cool! We accidentally visited a temple! We ate dinner at a Western-themed bakery restaurant, where I got pasta and a side of all-you-can-eat bread. I didn’t fully understand that my side of bread was a side of all the bread I wanted, but when our server kept returning with more and more bread for me to choose from, I figured it out pretty quickly. It wasn’t so much all-you-can-eat as it was your-server-keeps-bringing-the-tray-of-bread-but-please-don’t-eat-it-all. At least, I think the server would have been shocked if I had just taken the entire tray of over 50 slices of bread. 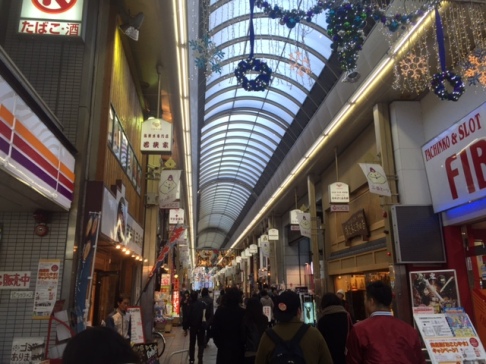 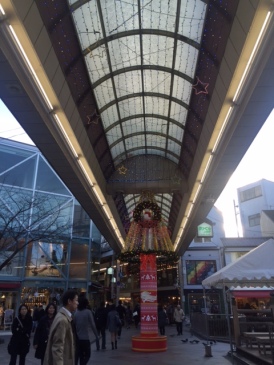 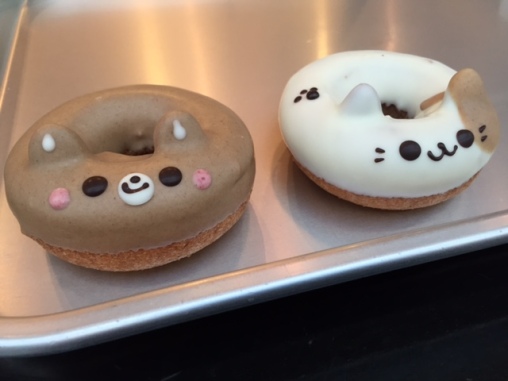 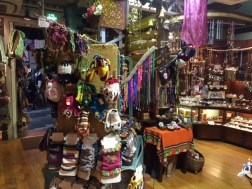 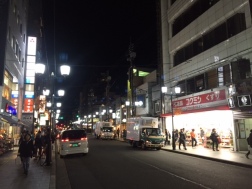 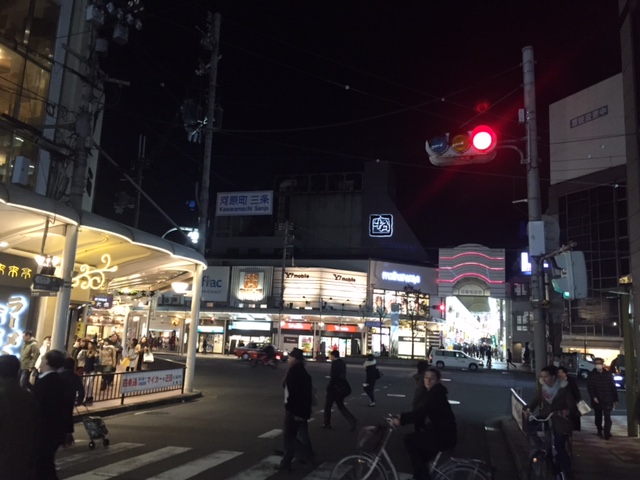 At the end of the night, we got more ice cream at the same convenience store and played more Minecraft late into the evening (oops.) Due to our geeky evening, we slept in and had brunch instead of breakfast. We ate at Mog, a pancake house near Nishiki Market. Hayden said that the pancakes were “much better than IHOP,” which was meant to be a nice compliment I think.

Our second day in Kyoto would be a day of more temples and shrines. Well, actually, this time we visited a castle — Nijo Castle. I vaguely remembered coming to Nijo Castle on a previous trip, but it was a really fuzzy memory. Nijo Castle is a big complex of buildings and gardens. The main building has a walk-through component, where you take off your shoes and walk through the hallways in the castle. (Unfortunately, photos are not allowed on this walk-through.) The hallways go past the many, many waiting rooms of the shogun. The old, dark wood floors in the castle are known as Nightingale Floors, because they are engineered to make a creaking sound (not unalike the chirp of a nightingale) as you walk across them. The creaking sound was meant to alert to the presence of ninjas and keep them from coming in the castle. It’s really neat to hear your own feet creating a very unique bird chirp as they move across the floor. Walking through the main building without your shoes feels like you’re walking around your own home — Nijo is a very peaceful place. The rest of the Nijo Castle complex is beautiful as well. There are many gardens and other buildings surrounding the main building. I liked Nijo a lot. 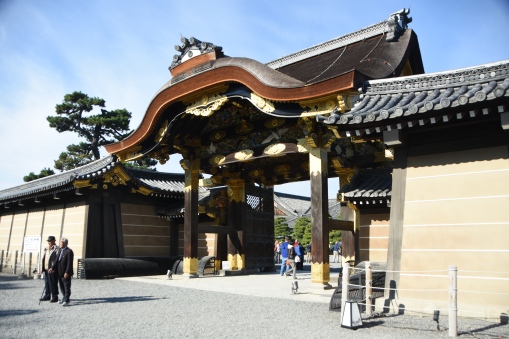 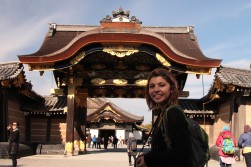 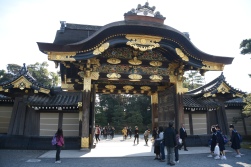 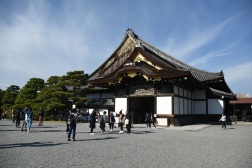 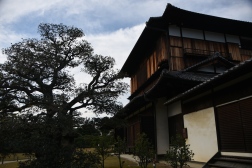 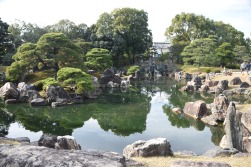 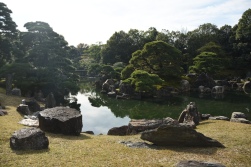 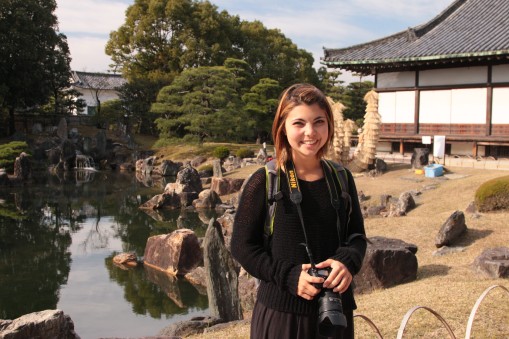 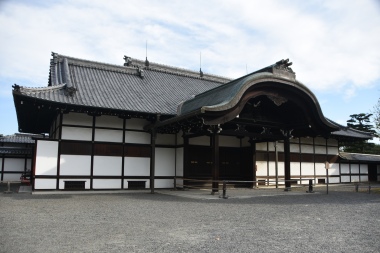 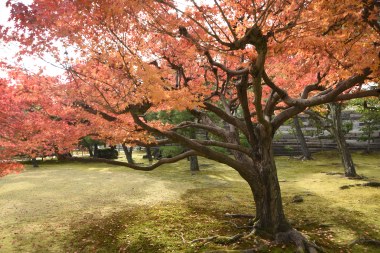 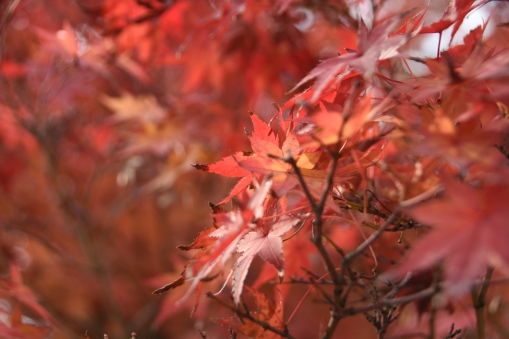 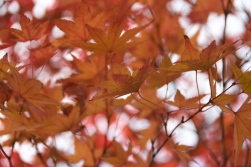 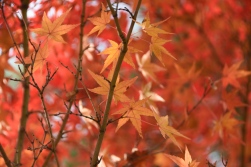 After Nijo Castle, we visited Heian Shrine, which I sort of remembered. Well, I remembered the place where you wash your hands before entering the shrine. They have these hand-washing stations at shrines all over Japan, but I think I remembered this one in particular. The entrance to Heian Shrine is at a big traffic intersection, so there’s a big traditional Japanese arch hovering over the street. It’s really cool. 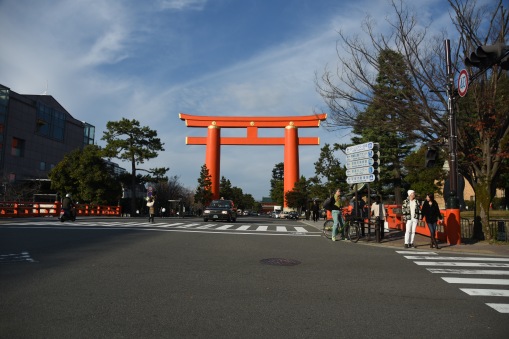 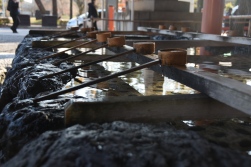 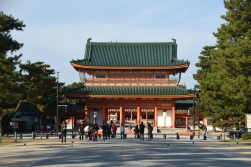 Hayden and the arch 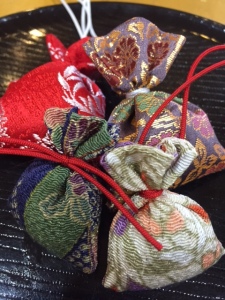 The Kyoto Handicraft Center is near Heian Shrine, so Hayden and I walked over because I was really itching to do traditional Japanese arts and crafts. There was fortuitously a craft-making workshop starting 30 minutes after we arrived, so I dragged Hayden along for the incense bag-making workshop. It was so fun! We mixed incense blends of cinnamon, sandalwood, clove, vanilla, and other things to put into a cute little bag. According to our instructor, the ingredients themselves did not originate from Japan, but the combinations of ingredients is Japanese. In days of old, people used to be trained to smell where different ingredients or combinations originated, but no one does that anymore. Our little incense bags could be used to keep bugs away or to just smell nice.

After browsing all the Things We Don’t Need for sale at the Kyoto Handicraft Center, Hayden and I walked back to Hana Hotel and rested (read: played Minecraft) before dinner. Once I tired of Minecraft (Hayden never tires of Minecraft, I am worried about him), we went out in search of dinner. It seems perfectly rational that we should eat a Japanese meal for our last night in Japan, but I was having inexplicable cravings for American food… Do they have California Pizza Kitchen in Japan??? Joking… kind of. Hayden was nice and took me to what we called an American Fusion restaurant, which was really just Japanese people making American food in a more Japanese style. Get it? American Fusion, because Asian Fusion is when Westerners put their own twist on Asian food… Hayden and I thought it was funny, and Hayden now refers to that restaurant as “the American Fusion place.” We don’t remember its real name, but it was the place right below Mog.

What is American Fusion like? First of all, the breadsticks were chopstick-shaped crackers served in a plastic wrapper. The pizza has the thinnest crust you will ever see — the infinitely thin crust, if you will. The pasta is served in a very tiny bowl. And there was also a Japanese-style meat dish offered that they just don’t cook at CPK. Basically, all the portion sizes were smaller because Japanese people don’t eat as much as Americans do. The food tasted great! “I love American Fusion!” Hayden commented enthusiastically.

That was our last real meal in Japan. On the way back from dinner, we stopped to get Hayden his last Calpis drink from our convenience store. I told him they would probably have them at the airport, but Hayden said he wasn’t taking any chances.

The next morning, we ate breakfast at the hotel and packed up our things. We had one more day of public transportation to get us home! We checked out of the hotel, bags and all, and walked (with our big bags — trudged) to a train station where we bought a ticket to the Miyami-Ibaraki Station. At Miyami-Ibaraki, we got off the train and got on the Osaka Monorail to Osaka Airport. The entire trip was about 1.5 hours long and only 750 yen. Not bad. We had successfully traveled all over Japan without getting lost once.

Osaka Airport was a different situation. We didn’t quite get lost, but we got very confused as we tried to figure out where we were supposed to go. Our flight had been purchased through Air Canada, but Air Canada didn’t actually fly out of Osaka, so I made an educated guess and went to check-in at ANA, which turned out to be the airline that would be operating the first leg of our flight. Gee, thanks for writing that on my flight itinerary, Air Canada… NOT.

Anyway, the whole process of checking in wasn’t so bad because we had arrived early, so we got through security with time to spare. We ate lunch at Sky Patio, a curry restaurant near our gate. I don’t like curry, so I ate the cutlet and the rice and left the curry sitting awkwardly on the other half of my plate. Legend has it, that curry is still sitting there… waiting.

We had three flights ahead of us before we would arrive home. (It was cheaper this way.) We flew with ANA (surprise!) to Narita, had a 3 hour layover and ate food, flew with Air Canada (someone finally showed up) to Vancouver, and went through customs there. Apparently, since Canada and the United States are friends, the United States lets people go through U.S. customs in Canada. This actually made our trip home a lot easier, since we didn’t have to do customs at LAX. 10/10 would layover in Vancouver again. Go Canucks! Haha, just kidding. But actually, go hockey! After customs, a Canucks sports bar, and an airport Cinnabon, we flew Air Canada Rouge (the cheap commuter Air Canada) to LAX. Woohoo! Back in the USA!

Mount Fuji between Osaka and Tokyo 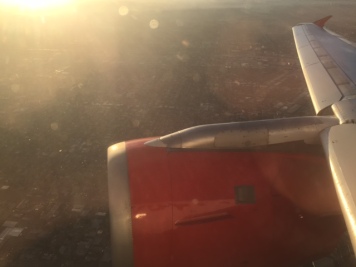 Los Angeles from above 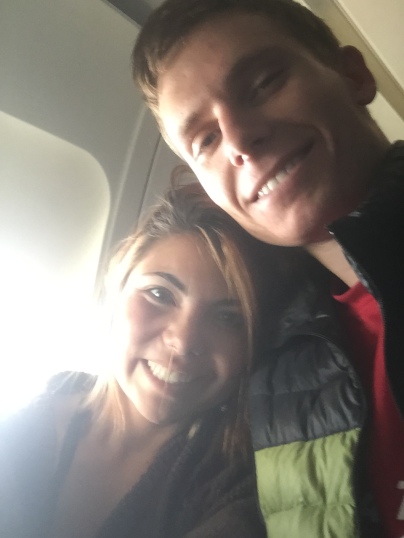 Our trip had been the perfect length, because I was happy to be home after all our adventures. Just in time for the holiday season (CHRISTMAS!!!) But don’t worry, this isn’t the end of rchoochoo! There will be more posts to come, including a recap post for our entire trip and posts for my upcoming trip to London!