Like I said in my previous post, we had a long day of transportation ahead of us. We rode the ferry back to the Peace Park Port in Hiroshima, then walked 45 minutes (whew) to Hiroshima Station, where we bought train tickets to Takamatsu Station. We boarded the bullet train at Hiroshima Station and rode it for an hour to Okayama Station, where we transferred trains to the Marine Liner (a less nice train) that took us on another hour-long ride to Takamatsu Station. We walked from Takamatsu Station to Takamatsu Port, where we boarded another boat (this time a “High-Speed Boat” rather than a “Pleasure Boat”) that took us to Tonosho Port on Shodoshima. Well, at least we were on the island. But wait! It’s not over! The hotel shuttle, which I had prearranged in anticipation of our arrival, picked us up from Tonosho Port, and took 50 minutes to reach the hotel. NOW we were done! We had reached the Bay Resort Hotel on Shodoshima, or Shodo Island, where we would be staying for two nights.

waiting for the high-speed boat

We had boarded the boat in Miyajima at 11am. We arrived at our hotel on Shodoshima at 6pm.

Shodoshima is a resort island known as a getaway location and also known for its olives, which grow on trees all over the island and are also sold in the form of olive products in many stores. I had been to Shodoshima 6 years ago, and had written my college application essay about the beach there, so it’s a place that’s very special to me and one I had been waiting a long time to revisit.

As a resort location, all the activities are very spread out on Shodoshima and there’s not much to do except hang out at the hotel. Our hotel was an exceptionally nice place. We checked in after a very long day and were guided to the section of the lobby where you select your yukata, or Japanese-style robe (like a kimono but simpler), which can be worn anywhere in the hotel, including dinner. Hayden and I were psyched about that — it’s like wearing pajamas to dinner! The yukatas are so comfortable. 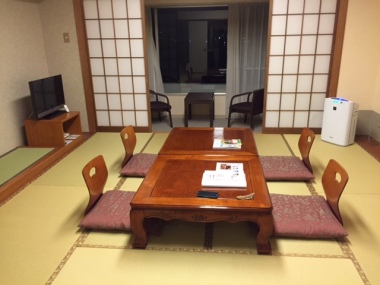 the view from our room

Our room was Japanese-style again, because I had thought it would be fun. When we arrived, our beds were not yet laid out. Hayden got nervous wondering whether a maid would come to make the beds, even though I insisted that someone would come, and he really wanted to take the bed materials out of the closet and make the beds himself. The poor maid would have been so confused.

We wore our yukatas down to dinner, called the “Olive fondue buffet” or The Cheapest Dinner Option, where we had what Hayden described as the best buffet he had ever had. I still hold Souplantation as my favorite buffet of all time, but this buffet was pretty good. There was an assortment of Japanese and Western foods, as usual. The buffet room was also really pretty, with big glittering chandelier-type decorations hanging overhead. It was beginning to look a lot like Christmas…

The next morning, we stayed in the hotel, had the breakfast buffet, and relaxed until afternoon, when we took the hotel shuttle to Angel Road, which is the official name of the beach I remembered from my previous visit to Shodo. Angel Road is also known as “Lover’s Sanctuary” (possibly flawed English translation.) Angel Road only appears three hours before and after low tide, which only occurs twice per day. The “road” connects Yoshida Island to the mainland of Shodoshima, creating the long peninsula that I had walked on my last visit. According to a sign on Angel Road, if you walk the beach hand-in-hand with a lover or special friend during low tide, you will find luck and happiness together. Thus, the beach is called “Lover’s Sanctuary.”

When we arrived at Angel Road, the tide was still high and wouldn’t recede for another few hours, so we had a quick look around and then found our way to a shopping center that I remembered from my previous trip. I don’t know why my tour group from 6 years ago had specifically visited a shopping center on Shodoshima, when there are so many shopping centers in the more metropolitan areas of Japan, but that shopping center ended up being a highlight of Hayden’s and my visit to Shodo. It was a really big building that was part supermarket, part department store, part 100 yen store, part arcade. The cool thing was that the four different areas were all open to one another, with no walls in between, so you could just wander around with a shopping cart full of items from all four places (though I don’t think you’re supposed to do that.) There were lots of little fake Christmas trees for sale between the supermarket and the department store, and I even considered buying one for the lols. Hayden and I started in the supermarket and got more Japanese snacks, then strolled through the department store, and finally bought a ton of Things We Don’t Need from the 100 yen store. But they were so cheap! Hayden gasped when he saw how nice all the items were at the 100 yen store. “No! This can’t be only 100 yen!” Hayden exclaimed, holding a decorated bowl. I told Hayden that it wasn’t that great, and Hayden said, “What are you talking about?? It’s beautiful!” and stared in awe at the little bowl. Hayden has never been to a Japanese dollar store.

After a long time spent at the shopping center, we wandered back to Angel Road and found that the tide had receded and revealed the land connecting the Shodo mainland to the tiny island. In my college application essay, I had written about walking across the beach and trying to get to the other side of the island, accessible only by going around a big obtrusive rock. At the time, the tide had been too high, so I had gotten scared and turned back. It had been my goal to walk the entire island this time around, and to reach the part where I had been too afraid to go. However, when Hayden and I went to circumnavigate the big rock, we found that the tide was even higher than it had been when I had come 6 years ago. We didn’t get nearly as far as I had gotten before.

There were a number of factors causing this. It was not yet low tide — it was more like low-ish tide, which would reach low tide in a couple of hours. Also, the day changes the time of low tide. When I was there in August 6 years ago, low tide was in late afternoon, so there was plenty of light to navigate the rocks. This time, low tide was well past sunset, meaning it would be too dark when the tide was finally low enough. 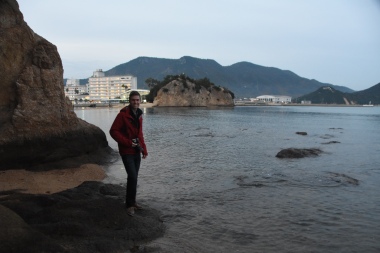 the side of the big rock

Hayden and I did clamber around the side of the big rock, until we reached the farthest point that the tide allowed. 6 years ago, it had meant something big to me to cross the beach on my own, when I had never really done anything on my own before. But now, it wasn’t so bad that we couldn’t walk to the end of the peninsula. After three months of Australia, New Zealand, and Japan, basically all on my own (plus Hayden), I didn’t feel like I needed to do anything more to prove myself as a Real Person. I was glad we had gone to the beach, though, because it really was pretty and peaceful. And Hayden and I did walk hand-in-hand down the beach because, even though it’s cheesy, who would turn down luck and happiness??

Shodoshima was a very different experience from my previous visit, even though many things there had stayed the same. I remembered taking like 20 really mediocre photos of Angel Road from an outlook where no one went, because I couldn’t get it just right. The outlook now had a roped-off platform with a bell commemorating “Lover’s Sanctuary,” and I took one long exposure shot in complete darkness, and got what Hayden and I called the money shot.

The hotel shuttle wasn’t running after sunset, so we took a city bus back to the hotel. Luckily, the hotel had given us a bus timetable chart and a map of the nearest bus stop to Angel Road. We navigated the map until we found a bus stop with Kanji characters matching those on the all-Japanese bus timetable. We successfully made it back to the hotel by city bus (to me, the most intimidating form of public transportation given the language block.) And we were just in time for dinner!

While we were away, the maid had come and put away our beds, and had also apparently taken our used yukatas. We figured that we get new ones every night, so we went down and picked matching colors to be super cute together.

At dinner, as we approached the hosts’ desk, I had barely pulled out my room key to show them the number when the hosts seemed to recognize our faces. They nodded and said “ichiban,” meaning number 1, and directed us to sit at table #1. Though our server’s English was not too good, he communicated that today we got a “special service” for some reason. There were little ceramic cookers holding uncooked meat and vegetables on our table, and the server lit the oil inside the cookers and said “10 minutes.” 10 minutes later, the server came back and told us we could go ahead and eat the food now. We never did find out why we got a special service and how the hosts knew who we were, but no one else in the restaurant got the same service that evening! It was a wonderful sort of confusion.

On the top floor, Bay Resort Hotel had an onsen, or hot spring bath, or what I called the ‘naked people bath’ as a 10 year-old. Hayden had never been to one, so we split up into the male and female bathrooms, respectively, so he could try it out. It’s a Japanese experience! The onsen is a public bath, where you rinse yourself off before getting into a sort of jacuzzi with a bunch of other people. It’s pretty relaxing to just sit there, except I get too hot in saunas/jacuzzis/onsens and have to get out after 5 minutes. Hayden said it was definitely memorable!

The next morning, we had our last breakfast in yukatas and checked out early to make the 8:30am hotel shuttle that would take us back to Tonosho Port. Everything about Shodoshima had been very Japanese and not too touristy. The people there, including the hotel staff and bus drivers, barely spoke any English, making it a very unique experience where we, the tourists, were not hand-held through Japan. We had the fun of trying to be like the Japanese.

We had another day of transportation, but we were pros now. The hotel shuttle took us to Tonosho Port, where we took the High-Speed Boat back to Takamatsu Port. We walked to Takamatsu Station and boarded the Marine Liner to Okayama Station, and from there took the bullet train to Kyoto Station. From Kyoto Station, we walked 15 minutes to Keihan Line and took it to Sanjo Station, which was close to our hotel. And now we are here, at Kyoto Hana Hotel! More to come on Kyoto in the next post.