The bullet train made the ride from Tokyo to Hiroshima so easy and smooth. On the bullet train, we had eaten many of the special cookies. We arrived at Hiroshima Station around 2:30pm and chose to walk to our hotel rather than figure out a convoluted bus system. The walk was estimated as 26 minutes by Google, but getting out of Hiroshima Station was more confusing than Google had expected and the entire walk ended up taking more like 45 minutes. We were lugging around literally all of our belongings that we own in Japan. It was easier for us than taking a bus connection, though, and the walk was worth it once we reached the hotel.

RIHGA Royal Hotel Hiroshima is part of a small luxury hotel chain across Japan and is built into a huge mall. There was a big fake Christmas tree and lots of little real Christmas trees surrounding the mall — Hiroshima had a lot more Christmas decoration than Tokyo did. We loved it! RIHGA seems to be like the Peppers of Japan. I had stayed here before during my two tours through Japan, but I definitely didn’t remember how nice it was! Not only were there several restaurants in the mall, there were also several independent restaurants in the hotel, plus an all-day dining restaurant and a fancy lunch and dinner restaurant that were part of the hotel. We weren’t going hungry today. The RIHGA still held the trend that I had noticed with Japanese hotels. The room was nice, but nothing special excepting the view (which was a spectacular cityscape.) The hotel as a whole was impressive and elegant. Less emphasis on the room and more on the big picture.

The moment we entered the room, the expansive Hiroshima cityscape shined in through the window in a moment of brilliant lighting. The RIHGA really was very nice. It was too bad we weren’t staying in Hiroshima longer, but there’s always next time and there are RIHGAs in other Japanese cities. (I miss you, too, Peppers.) 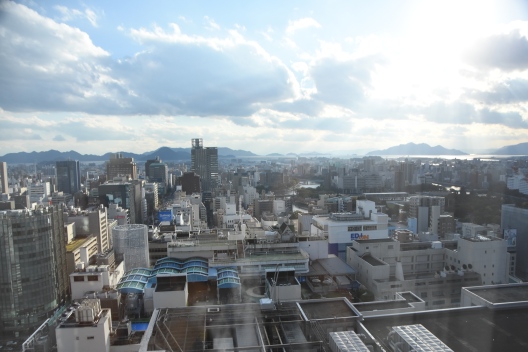 the view from our room 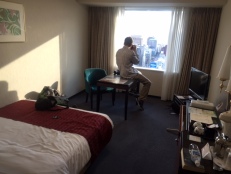 our room at the RIHGA

our bathroom at the RIHGA

We hurried out to see Peace Park, which contains the main monuments in Hiroshima, before dark. I had been there twice before, but Hayden obviously hadn’t ever been so it was important to take him. We strolled past the A-bomb Dome and then the Children’s Monument, where we donated origami cranes that we had made on the train. The story behind the cranes is that there’s an old legend that you can make any wish if you fold a thousand paper cranes. A little girl who had contracted leukemia due to the A-bomb believed this legend, and folded a thousand paper cranes in attempt to live. After she passed away, the Children’s Monument was erected for both her and all the other children who had died because of the Hiroshima bombing. Surrounding the monument, there are big glass cases full of the paper cranes that people all over the world have made and put there. 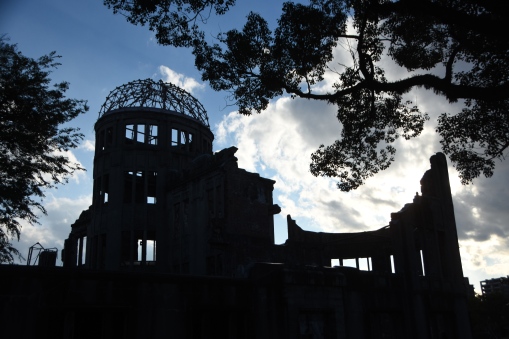 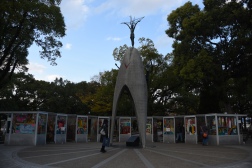 paper cranes in the shape of a dove 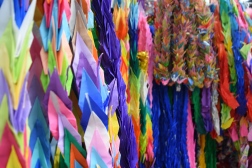 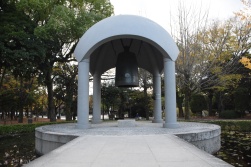 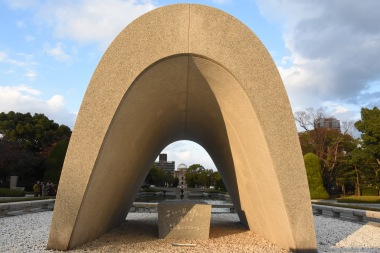 Though we didn’t think we would have time for the Hiroshima Peace Memorial Museum, as we passed through Peace Park, we realized that we had at least an hour and a half until the museum closed, so we went for it. From my two previous visits, I didn’t remember how grim the museum was. Even if I remembered the exhibits inside, I didn’t remember how terrible it is to see the grotesque details of the A-bomb aftermath. The museum stands to remember the things that the people who weren’t involved would rather not think about, but should. I was glad that I had gone back as an adult. I could think about more than just what the museum held inside, but what it means to the world outside and to me as an engineer. Hayden, too, was really glad to have gone. What we learn in school is that the bombs dropped, but it was a mistake, and the war ended. I’ll bet that Japanese schools teach more than that.

The museum also displayed the paper cranes made by that same little girl. The cranes had been distributed to those who had attended her funeral, and somehow the museum had collected a great number of them. The caption beneath said that the cranes demonstrated the girl’s intense desire to live. In the midst of so many horrible consequences of the bombing, these fragile, colorful little cranes stood out as the most beautiful symbol of life.

Hayden and I exited the museum and outside it was dark with really pretty nighttime city lights. We got great long-exposure shots of the A-bomb dome from the bridge. 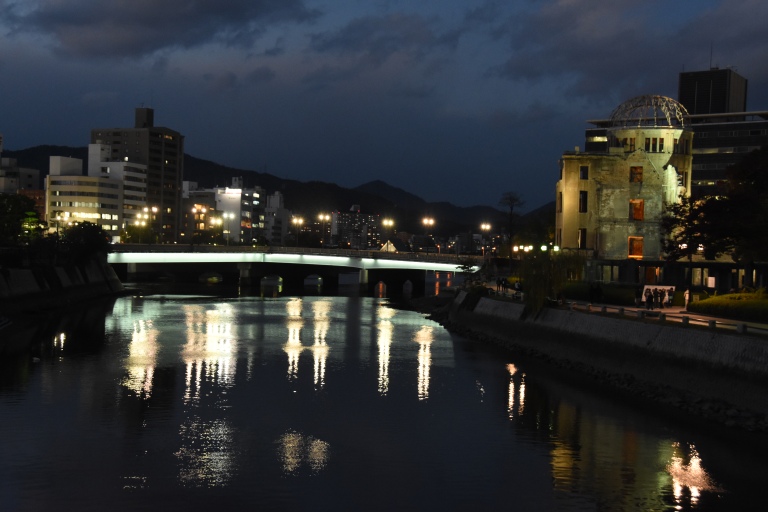 When we returned to our hotel, the Christmas trees in front of the mall were all lit up. It was amazing — I love Christmas! We ate dinner at a restaurant in the mall, and I realized that it was Thanksgiving Day in Japan (not that they celebrate that.) Over tempura udon and katsu-don, we had our Thanksgiving meal. Hayden actually said that the egg dropped over the katsu-don hurt his stomach and reminded him too much of how Australia puts egg on everything.

the mall and our hotel 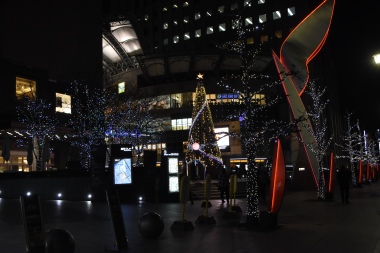 Back in the hotel room, our cityscape view had transformed into an even more epic landscape of Hiroshima’s city lights. Hiroshima is really beautiful at night.

One thought on “A Thousand Paper Cranes”