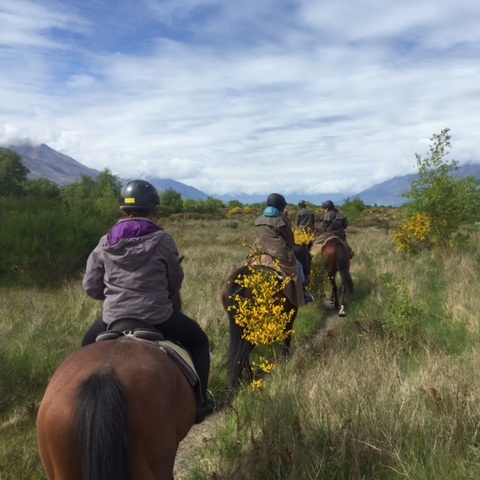 As we had discovered the previous day, there wasn’t much of anything to do in Haast. When we woke up, it was raining hard. We quickly got on the Haast Pass headed towards Queenstown, where we would be staying for the next three nights. The rain surged on for the first half of the drive. In Makarora, our original desination for the previous night, we stopped for breakfast at Makarora Cafe. In that rain, we sure were glad we hadn’t camped in Makarora!

The rest of the drive to Queenstown was beautiful. The weather cleared up and it was all lakes and mountains and curvy roads. Yet another great road in New Zealand. We checked in early to the Queenstown Motel Apartments, a cute little apartment-style motel. The view of Lake Wakatipu from the motel was fantastic! Though we had planned on doing the Queenstown Hill Hike, it was very windy in Queenstown, so we just opted for lounging in the room for a few hours.

Eventually, in the late afternoon, we convinced ourselves to leave the room and explore the Queenstown city center. Our first stop was Alpine Market, where we picked up groceries including oatmeal (!!!) — Hayden became frustrated with me when I expressed a clear desire to select a very particular kind of oatmeal, and went to a different aisle while I browsed the instant oatmeal packets that Alpine Market had to offer. After much deliberation between me and myself, I selected a package called Kiwi Favorites — a New Zealand oatmeal brand! — that included Sweet Maple, Sunrise Caramel, and Honey and Golden Syrup. We would be eating these in a few days when we set off backpacking the Routeburn Track, so I will be writing more long paragraphs about oatmeal very shortly.

Following Alpine Market, we discovered that Queenstown, like Melbourne and Hobart, had no short supply of outdoors stores. At Small Outdoors, Hayden got a Titanium camping spork, because he had broken his plastic spork in half while aggressively assembling a peanut butter and jelly sandwich. I got a new beanie as well, because my bright blue owl hat was falling apart. Then we got pre-dinner pastries at Fergbaker, which seems to be named as a play on Fergburger, a famous burger restaurant next door. Apparently, Fergburger is this incredible burger joint where everyone absolutely must eat in Queenstown. However, I am not a fan of doing things on vacation because you have to do them. (That’s how you end up visiting lighthouses, waterfalls, and glaciers.) And the line for Fergburger goes out the restaurant and past Fergbaker. And I’m from the United States — we are the masters of the burger. Like, are the Fergburger cows famous cows or something? I think I’ll add Fergburgers to the club with lighthouses, waterfalls, and glaciers. (“Take a picture with the burger, honey,” someone has probably once said about Fergburger.)

Leaving Fergburger far behind, Hayden and I found The Cow, a pizza and spaghetti restaurant nestled in a back alley. The Cow literally only offers pizza and spaghetti main dishes. The food was yummy and the restaurant had warm, quiet pub vibes. After dinner, I got the warmest handknit sweater from a local wool store. It reminded me of the sweaters that Ron Weasley’s mom makes for Christmas every year.

At the motel, we watched more episodes of Friends — Hayden finally got to see the episode where Rachel finds out! Of course, then Ross comes back with his new girlfriend, Julie, right when Rachel decides that she wants to be with Ross! Hayden was so sad about that.

We woke up fairly early the next day to make a 9:15am appointment check-in at Dart Stables in Glenorchy. Today was the day! We were going on a 2-hour trail ride. Supposedly, the particular ride we had selected was good for couples of mixed riding abilities, so I was hoping I would get to do some trotting! It had been nearly three months since I’d been on a horse. We took a shuttle to the start of the trail, where the horses were saddled and waiting for us. My horse was Trevor and Hayden’s horse was Ginger.

From the beginning of the ride, I knew that this would be no ordinary trail ride! The New Zealand horses were incredibly hardy and well-trained, and the folks at Dart Stables were relaxed (not hyper-concerned with liability like in the States) and led a very non-touristy trail ride. Everyone had a go at the trot, which I was thrilled about. My horse riding muscles were out of use, but slowly I got back in the swing of things. Posting! I was posting!

To make my day even more amazing, the trail leader took me and two others to canter while the rest of the group walked. Cantering! We were cantering! I had only ever cantered once before during a lesson, and I told the trail leader as much, but she shrugged and said I was doing pretty well at the trot, if I wanted to try the canter. Heck yes I did! The canter was exhilarating and my legs were getting sore sore sore! We met up with the rest of the group and did some more trotting.

The trail passed by these huge mountains that Peter Jackson had used to assemble the Misty Mountains in Lord of the Rings. The trail leader asked us, “Does anyone know what these mountains were used for in the Lord of the Rings?” and I said, “The place where Gollum lived?” which she didn’t understand, so I said instead, “The Misty Mountains?” which was right! I had proven myself as a solid geek and I was proud of it. Apparently, eight Dart Stables horses had been used in the filming of the Lord of the Rings, but those horses had since been retired, so we weren’t riding any of them today.

However, one of our horses was a movie star, from the terribly reviewed film, Prince Caspian. It was Trevor, my horse! For Prince Caspian, they had brought in these expensive black horses from Australia, but when it came time to cross an icy river, the Australian horses wouldn’t go! The Dart Stables horses, including Trevor, with their river-crossing hardiness, came to the rescue. So if you watch closely in the beginning of Prince Caspian, everyone is riding black horses until they get to the river, and then all the horses turn brown and the actual Prince Caspian rides Trevor across the river!

Speaking of rivers, the trail ride went straight through several rivers and streams! Our hardy New Zealand horses bravely waded in and gave us tourists the novelty of river crossing on horseback. The ride was called The Rivers Wild, after all. So many firsts in one ride. We didn’t get wet at all and it was an amazing, one of a kind experience.

The whole group did a bunch more at the trot, and the more experienced riders went a couple more times at the canter as well! Wow! WOW!! Words cannot describe how crazy amazing the ride was. Though I’ve only been riding for a year, this experience got me so excited to keep getting better and learn new things!

Throughout the ride, Hayden rode directly behind me, and Ginger kept nipping Trevor in the butt! What a sour puss Ginger was. Hayden and I thought it was funny that our horses didn’t get along.

We stopped at the shore of Lake Wakatipu for a photo opportunity and then the ride concluded shortly thereafter. 10/10 definitely will ride at Dart Stables again. That was the hardest I have ever ridden. It has been my favorite experience traveling so far, and that’s saying a lot considerinng all the amazing things we have done so far. My entire body was sore after that ride — my arms, my back, and especially my legs. I could barely walk, and it felt good! Hayden had to deal with me waddling around for the entire next two days. 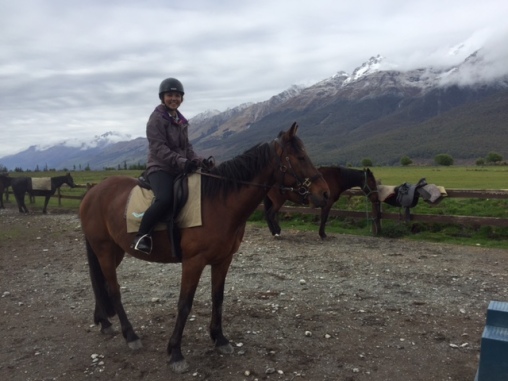 mounting a horse for the first time in 3 months! 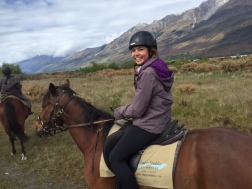 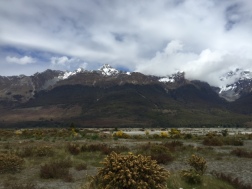 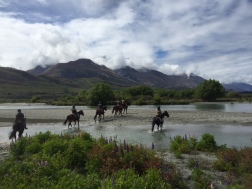 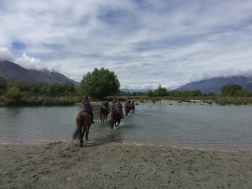 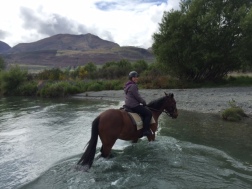 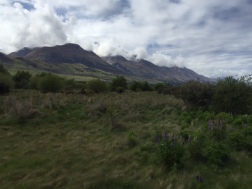 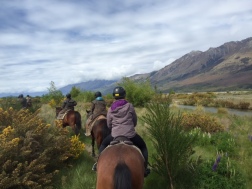 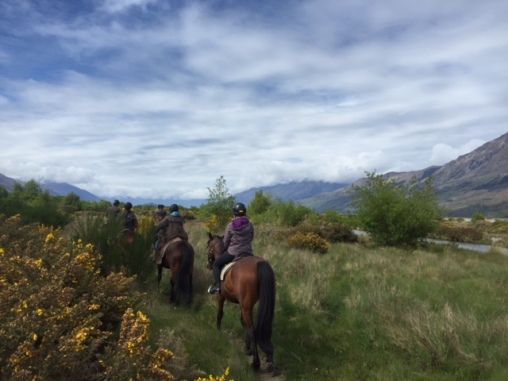 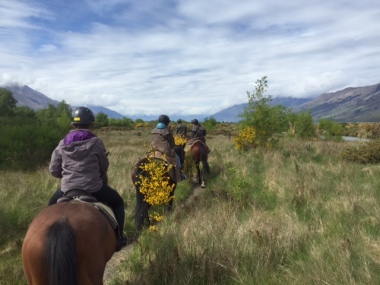 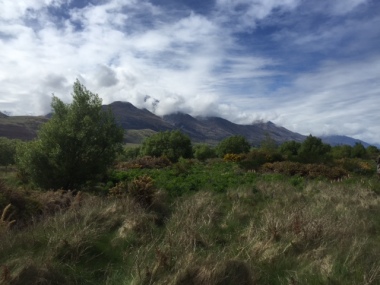 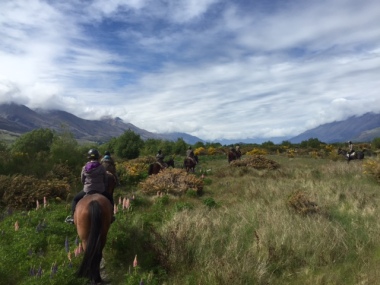 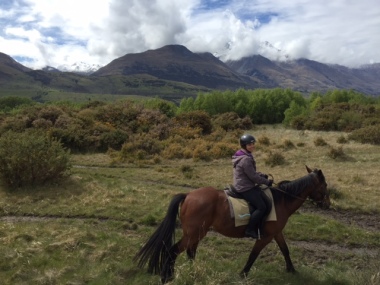 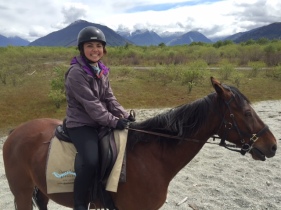 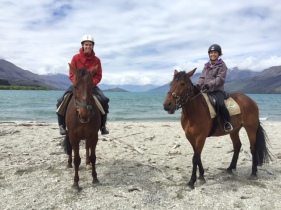 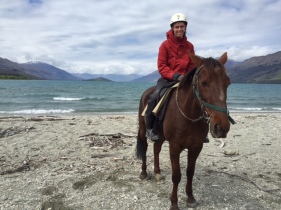 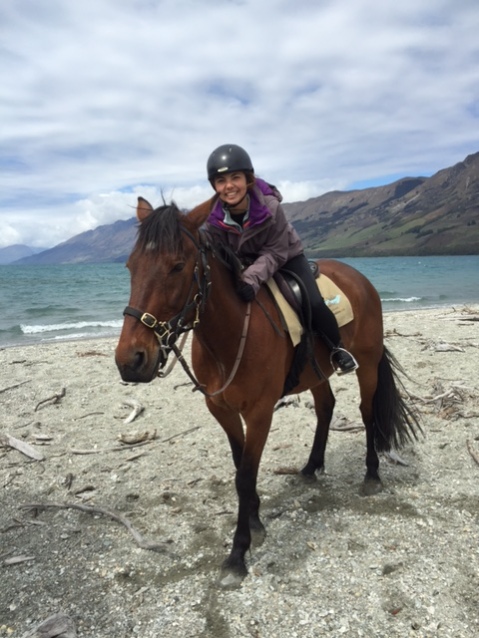 After Dart, we left Glenorchy and headed back to Queenstown for some rest. At some point, I realized that my jeans were missing and we sorted out that Hayden had hung them up to dry while doing laundry and had inadvertently left them in the room in Haast. I was very sad, because it was my only real pair of pants that I had brought with me on our travels, so we went out to the city center and Hayden got me a replacement pair. For dinner, we got smoothies in town and then went back to the room and had a big plate of cheese, crackers, salami, and strawberries, plus more episodes of Friends.

We took the day off from physical activity since I was still incredibly sore from riding and we would be embarking on a Great Walk tomorrow. For breakfast, I made toast and learned how to microwave eggs, since we didn’t have a stove. Breakfast came with a side of Friends. Hayden finally got to see the episode where Ross finds out, and then the one where Rachel and Ross are about to get together but then Rachel sees the list Ross made! That afternoon, while walking in the city, Hayden kept going on about how Ross’ friends really should have backed him up about the whole list debacle. I told him that it would all be okay in the end, but Hayden was still disgruntled.

In the city, we picked up our Routeburn Track hut tickets at the Queenstown Visitor Center, and then went to Alpine Market for more food for the Routeburn Track and for Milford Sound afterwards. Later on in the day, we used my new Kathmandu membership to get 50% off a rain cover for my backpacking pack, since Hayden was very concerned about what would happen if it rained while we were backpacking. Hayden also got a haircut at Queenstown Barber, because he was irritated that his hair kept “blowing in the wind.” I was very sad to see his hair go, but he promised that it would come back. Dinner was Mrs. Ferg gelato (another Ferg) and more Fergbaker pastries, and then Hayden was still hungry so he got Indian food to-go. (By the way, in the States, we say “for here or to-go?” but in Australia and New Zealand, they say “have here or takeaway?” which is honestly really confusing when you’re not used to hearing that phrase. The day ended with us packing for the Routeburn Track and then falling asleep at a reasonable hour.

Overall, Hayden and I both agreed that Glenorchy would be a phenomenal place to stay in the future. There are lots of hikes, horseback rides at Dart, and kayaking (Hayden’s favorite.) Queenstown is small and cute and has beautiful views, but I found it to be a little crowded for my taste. At rush hour, there was always a mess of cars honking and getting angry at one another. Why can’t we all just be happy??? And there were just too many people crowding the sidewalks. The line for Fergburger speaks for itself. Sure, it’s a smaller city, in the grand scheme of things, and there’s lots about Queenstown to like, but the highlight of our Queenstown stay was in Glenorchy. I’m definitely coming back!

One thought on “Tame Horses”