The alarms went off bright and early before sunrise… and we turned them all off and went back to sleep for two more hours. We decided that we’d had enough of the Apostles for one vacation — they were great, but not wake-up-before-sunrise-after-we-had-already-seen-them-at-sunset great. Those two hours of extra sleep were great. We woke up to the beautiful pastures behind our cottage.

For breakfast, we had planned on collecting eggs from the chickens and cheese made from the farm cows’ milk (no really, it was advertised on the cottage website), but no one was around and the food shed that was meant to house these homegrown food products was shut and locked. So we headed to the Princetown General Store, a tiny place with only 1 of each product. There was a sign for eggs, but there were no eggs in the fridge, so we asked the lady at the counter and she collected 6 eggs from the back for us. I joked that she had to coax the eggs out of some hens back there. Additionally, there was no bread, so she gave us a random half-loaf that was sitting behind the counter for the cafe’s sandwich-making. We also picked up a huge tub of butter for spreading and cooking, and a carton of milk.

Before heading back to cook breakfast, we headed down a road that had looked cool on Google Maps. It was a short one-way dirt loop near a lake and a campervan park. As the road got bumpier, Hayden mused, “I think this is exactly what they told us not to do with the rental car [offroading].” The road wasn’t that impressive but it satisfied Hayden enough that we could go home.

Back at the cottage, we added the leftover onion from the previous night’s meal to the eggs and whipped up a simple breakfast. It tasted so good because we made it! After eating out so many times — and I am not a fan of the lunch foods served in Australia — it was great to have a couple home-cooked meals. 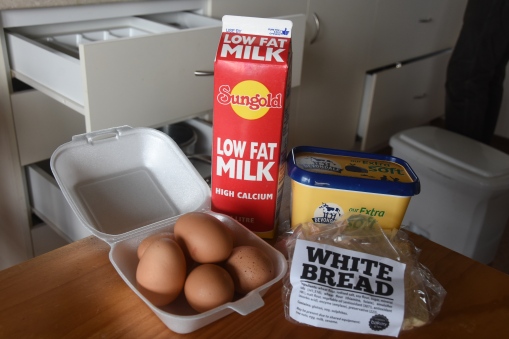 In the cottage’s information pamphlet, there was a vague instruction about where to dump your rubbish that said “Rubbish can go in the rubbish bins. You may feed the chickens with VEGETABLE WASTE ONLY.” We took that as the go ahead to feed the chickens our leftover onion and corn. Interestingly, since the chicken coop was situated inside the sheep pen, we had to enter the pen and roam with the sheep in order to get to the chickens. Hayden went ahead and wandered inside the chicken coop. We dumped the onions and corn cobs on the ground and watched the chickens peck at the corn and get confused about the onion. The onion chunks that we cut for them may have been too big, or maybe chickens don’t eat onion. Further study is needed.

The rooster cock-a-doodle-doo’d more than a few times while we were in the coop. 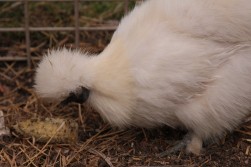 This one looked funny. We don’t know why but we liked him a lot. 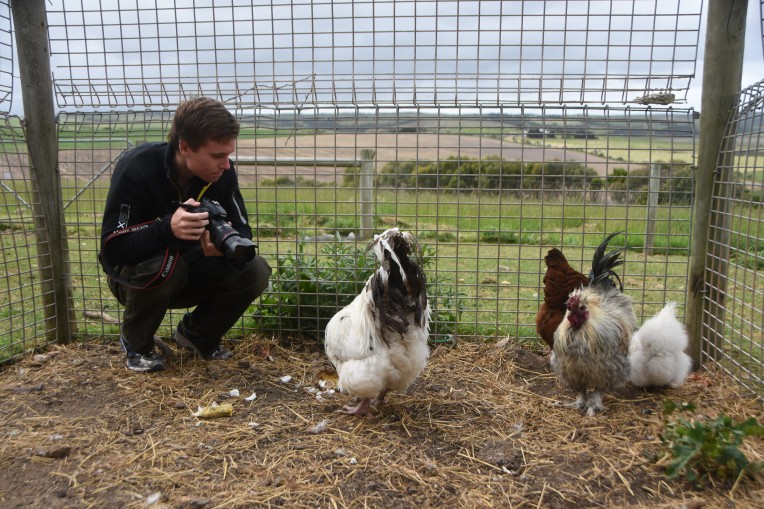 Hayden really wanted to go to Cape Otway to see another lighthouse, so on our way to Melbourne we drove a little out of our way to the coast to see the dumb lighthouse. The road to Cape Otway was beautiful, though. The most dangerous thing on the road, however, was not how windy and narrow it was… it was all the cars piled up on the side of the road from people trying to spot koalas in the trees. Apparently, Cape Otway is a cool place for koalas to hang out. Well, ha, we already saw one, and he came right up to our car! Hayden and I didn’t want to be those people stopped on the road, so we satisfied ourselves with spotting the koalas while we were driving. We saw a couple, but the one we had already seen was way cuter. And he was our friend.

We left Cape Otway and had lunch at a bakery in Apollo Bay. To be more specific, I had a donut for lunch. We also picked up tape at a supermarket in Apollo Bay so that I could tape my camera lens back together. Also, since I’d recently finished reading The Martian, I purchased a new book, Midnight City, at an small, overpriced book store. It was a science fiction novel about an alien race called The Assembly that invaded Earth and used something called The Tone to control all of humanity… except the children weren’t affected by The Tone! I was so excited to read my new book, which Hayden said that he probably wouldn’t read (not his thing, I guess).

Melbourne was really stressful. Traffic was congested right around when we got into town and everyone was on the streets looking for dinner. We were immediately glad that we weren’t staying there for more than a night, because it was a little much for the both of us. I had been told that Melbourne was like an Australian San Francisco and, while I like Australia, I despise San Francisco… (Hayden and I are more the sheep-and-chicken type rather than the people-people type.) But the hotel was nice enough and we had dinner at a ramen house called Little Ramen Bar. Hayden said he liked Ajisen Ramen better.

When we got back to the hotel, I found out I would be having an internship interview in two days in Hobart! I frantically rushed to get old MATLAB files transferred from my computer back in California and started to study for my technical interview. Hayden helped out by being his enthusiastic self.

We got our bags packed and ready for our first flight since arriving in Australia, because we were headed to Tasmania early the next morning! We would be starting in Hobart, doing a counterclockwise loop through Freycinet, Bay of Fires, and Cradle Mountain National Park, and ending in Hobart before flying out again. Tasmania was really Hayden’s part of the trip and he’d basically organized the whole thing, so other than a vague overview from the travel itinerary, I didn’t know what to expect and it was going to be a big fun surprise.