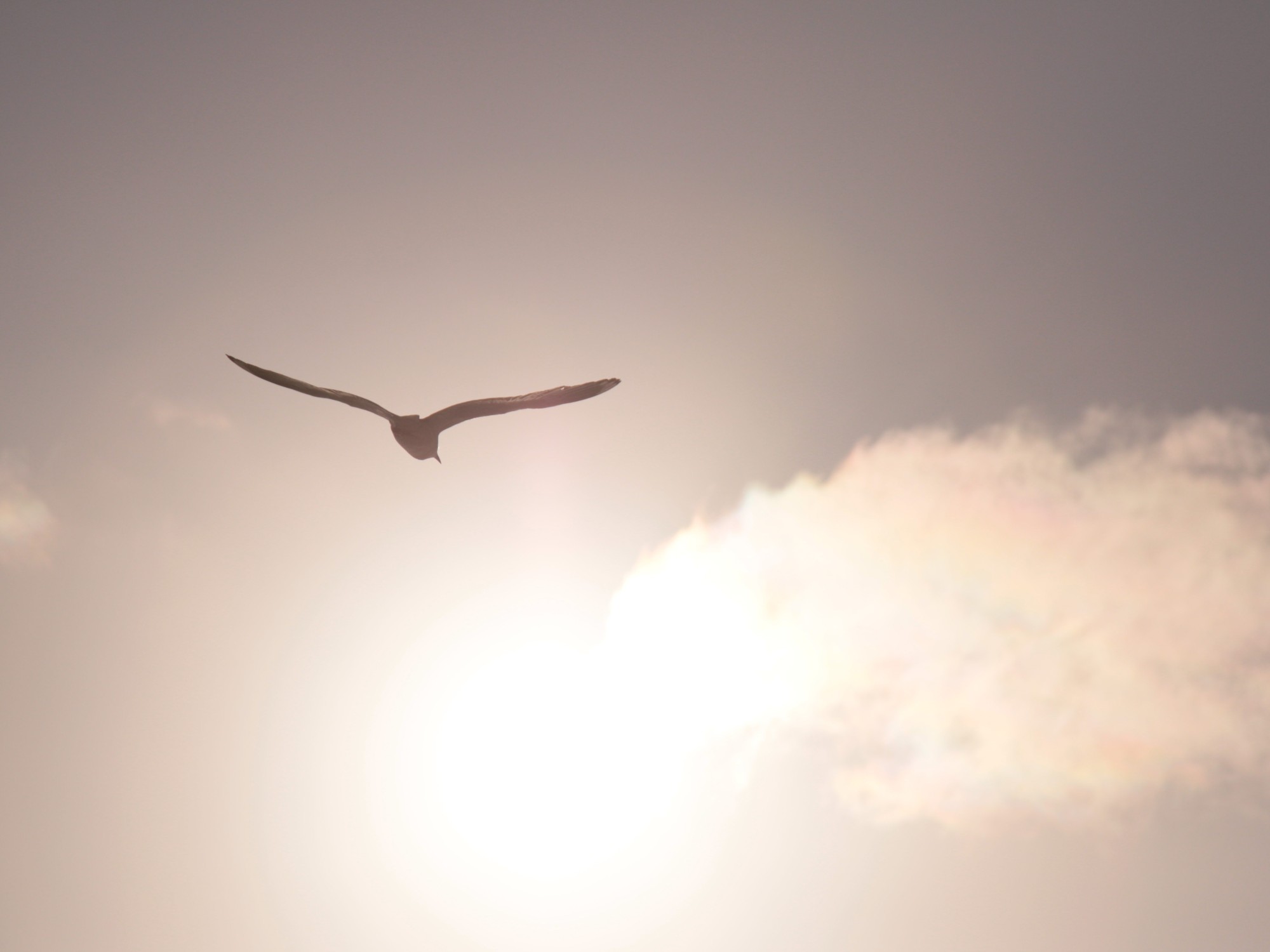 We ate breakfast at the Marina Cafe, which sat right next to the docks in Robe. The day started out cold and gray, which reminded me a lot of Iceland. Looking outside from the safety of the Marina Cafe, even the parking lot aesthetic was so reminiscent of Iceland — damp pavement, four wheelers with snorkels, clean metal railings. It was cool.

Then it was back on the road again… And on the road, we encountered a koala! The koala was crossing the road at a very leisurely pace as our car and another car in the oncoming lane sped towards it. The oncoming vehicle slowed enough to let the koala by, and we came to a complete stop as the koala crawled right in the way of our vehicle. Unfortunately, the koala didn’t get the message that we were all waiting on him, because right when we stopped, he stopped as well and stared up at us with big, innocent eyes. “Hi,” his eyes said. “MOVE DUDE, YOU’RE GONNA DIE,” I thought in frustration as cars approached at high speed behind me. I honked and his eyes said, “Oh…” and he finished crawling across the road and we were on our way again. Moral of the story: WE SAVED A KOALA.

We didn’t reach the official beginning of Great Ocean Road until about halfway through the drive, when we reached Port Fairy. We went to the supermarket there to pick up food to cook for dinner that evening (we would be staying in a cottage!) and then we got lunch at a nearby Turkish cafe. Hayden was amazed at the sandwich he got, and I thought mine was fine.

After lunch, we went to Griffiths Island, a small island just barely off the coast of Port Fairy, and saw a lighthouse. Hayden is obsessed with lighthouses for some reason. In Iceland (speaking of Iceland!), we toured from waterfall to waterfall and after the fifth waterfall, I questioned what was so special about waterfalls in the first place. Hayden’s obsession with lighthouses is like other people’s obsessions with waterfalls. I have since grouped lighthouses, along with waterfalls, into the category of Things I Do Not Wish To Visit. In any case, we saw the lighthouse from afar to satisfy Hayden.

After Griffiths Island, we got back on the road and made our way to the 12 Apostles. We checked into our cottage — an unexpectedly reasonably priced but nonetheless flamboyant booking for my own amusement — just a few minutes away from the Apostles. We arrived and saw the cute cow that had been advertised on the website. There wasn’t just one cow, there was a whole herd (all friends)! There was also a chicken coop sitting inside a pen holding four sheep. And right next to the sheep pen was our cottage!

We didn’t exactly know that it was our cottage at first. We parked, got out, and looked around for any sign of people. No one was around. How would we know which cottage was ours? How would we get in? “Maybe this is the kind of place where they just leave the key under a rock,” I said, right as Hayden noticed the door sign of the cottage nearest to us. It had his name on it! The door was unlocked for us and the key was sitting inside. We were home!

Our cottage was made to fit four people, with two bedrooms, a bathroom, and a living room/dining area/kitchenette. I had been under the impression that there would be some sort of stove, but there was only a hot plate and a skillet and a bunch of cookware, so we made do with that. Dinner was lasagna noodles for me (just the noodles, rolled up and dipped in sauce) and bowtie pasta for Hayden, with corn on the side. We gave up halfway through the meal; we were so full. Then sunset was upon us, so we hurried down the road back to the 12 Apostles to get some photos at dusk.

Around this point, I noticed that the front glass piece of my camera lens was falling off (it’s not supposed to do that) and panicked. Apparently, it’s a common problem and the camera will have to go back home to Nikon to get fixed. It can’t do that until I get home in December, so in the meantime, since I didn’t have any tape on me at the time, I used the label off of Hayden’s camera to hold my lens together.

We arrived at the Apostles a little too early and walked down to Gibson’s Steps to waste a little time. I don’t know who Gibson was or why he had steps, but they were pretty cool. There was a big gate blocking our path down the steps, reading “HIGH TIDE DANGER: NO ENTRY,” but then we saw at least seven people come back up the steps and hop over the gate, so we shrugged, hopped the gate, and went down the steps to the beach. From the beach, we could see one of the Apostles from ground level. 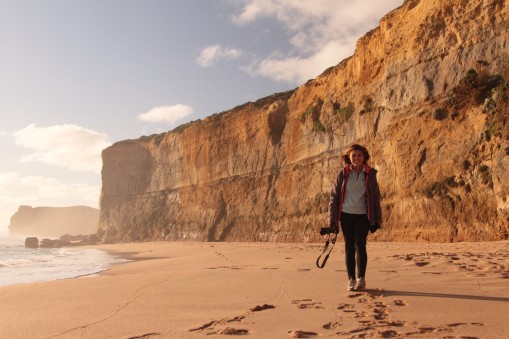 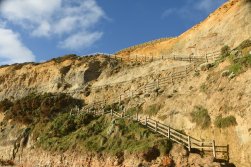 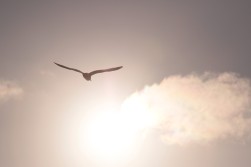 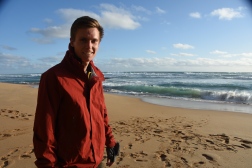 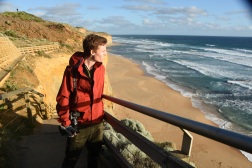 coming back up the steps 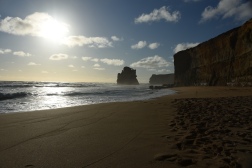 Back at the 12 Apostles viewing platform, we got some better shots of the Apostles when it was darker. Eventually, the prime window of light ended and we went back home to our pasta, just sitting there like we’d left it. It was still good! We ate the rest of our pasta, then went to bed so we could wake up early to see the Apostles at sunrise. 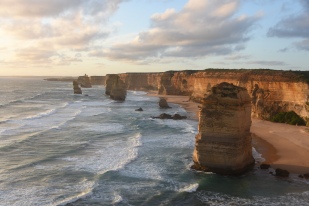 getting a good shot 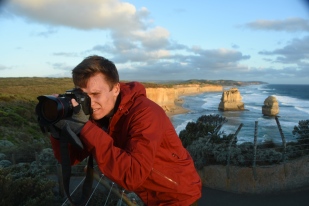 Hayden and an Apostle

One thought on “Great Ocean Road: Robe to 12 Apostles”