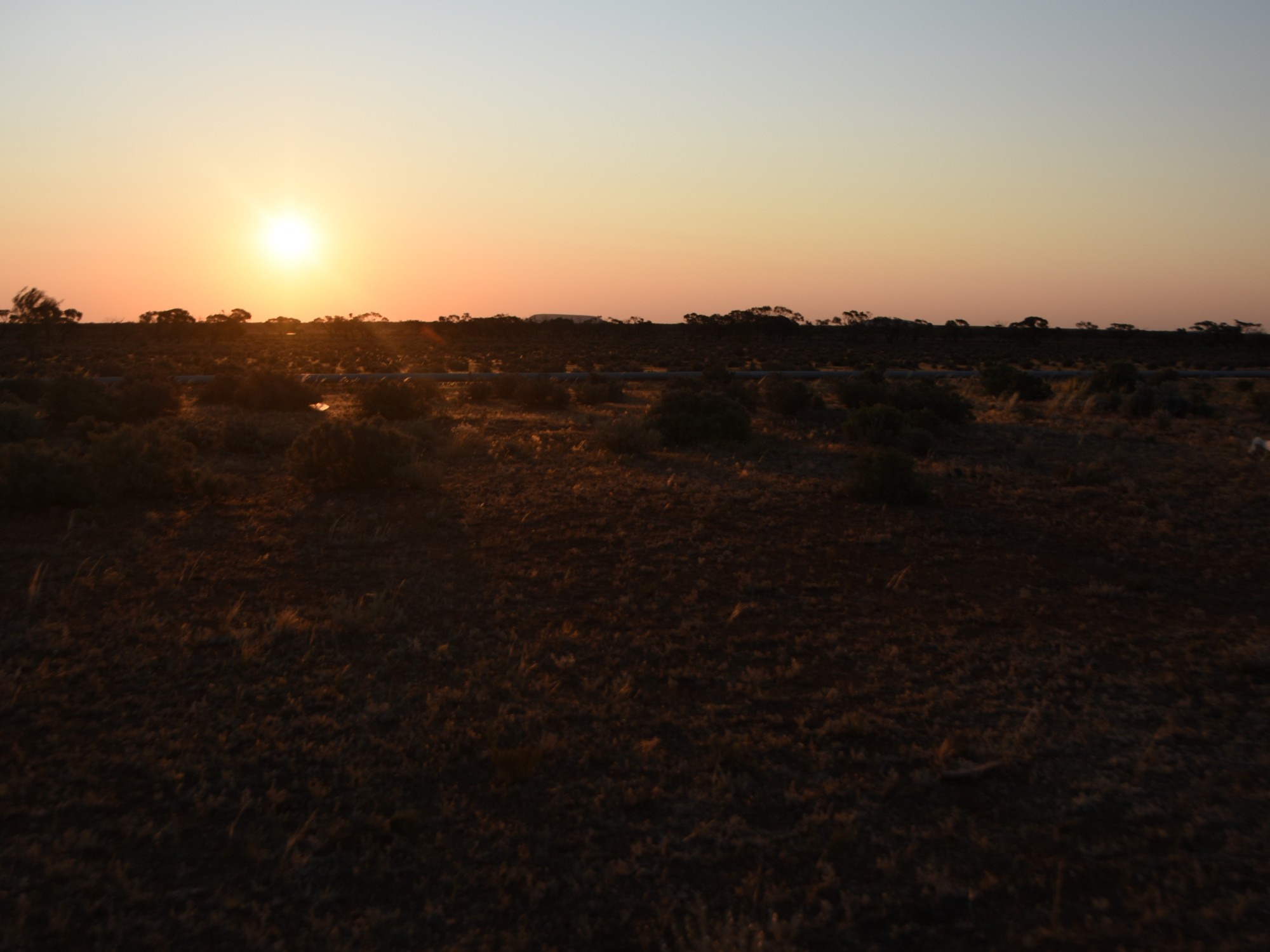 The sunrises keep getting earlier and earlier, and our wake up times have been accordingly moving up 20 minutes each day. I have been a lot more motivated to get up in the morning knowing that breakfast is something MUCH better than cereal in lukewarm milk.

While array standing, Hayden and I played a game that we invented during our month in the outback, where I ride piggy-back on Hayden and he runs around with me on his back and we pretend that we are an emu. Unfortunately, there is no photographic evidence of us being an emu, so you’ll have to take my word for it. Just more of the same array standing photos — boooring!

We reached our old stomping grounds in Coober Pedy and then continued on to the dreaded Glendamboring, then onwards until 5 pm. We camped at a pull-off about 100 km north of Port Augusta, saw three cows on a road train, and had skillet lasagna for dinner.

More on the cows: We often see road trains carrying cows to and fro, and I always hoped that the moo-moos were for dairy and not steak. Then, at our stop for the night, a huge road train carrying only three cows pulled in. The trucker got out to see what all the solar car ruckus was about, so I asked him questions like “Why are there only three” and “Where are they going” and “Are they for food.” He told me that these three cows, intended to be breeders (yay! they’re not going to die!) were going home to Alice Springs because, when prompted to get out of the road train, “didn’t get up.” So I learned that cows can just choose not to get up and they get to go home.

All in all, this race has been for me like running on a treadmill. You need to remain alert and content while doing the same thing for an extended period of time, and if you slip up or you’re too tired, you’ll fall off the treadmill (can confirm, has happened to me). It’s an endurance competition as much as it is an engineering competition. You just keep going, keep going, don’t slow down, until someone tells you it’s time to stop.

Tomorrow we will hit our last control stop in Port Augusta, and the next destination is Adelaide (the finish line!) after that. Today, Facebook notified me that 4 years ago today, I was making a silly poster about some inside joke in my freshman dorm. 4 years ago today, I was a freshman going through my first quarter of college! Today, I am camping somewhere between Glendambo and Port Augusta next to a loudly idling road train.