I was warned by Darren that “you’re going to be f***ing bored in Glendambo,” and by Jame that “Glendambo — not even twice” since he had already been once before. The beginning of the drive from Adelaide to Glendambo was actually very nice, with quaint farmlands and slowly spinning windmills.

We arrived in Glendambo after sundown and set up camp at the one and only Glendambo campervan park. Hayden and I set up his two-person tent, not without difficulty, in Glendambo’s trademarked hard red dirt. Next morning we woke up to a sunrise that was far from boring! 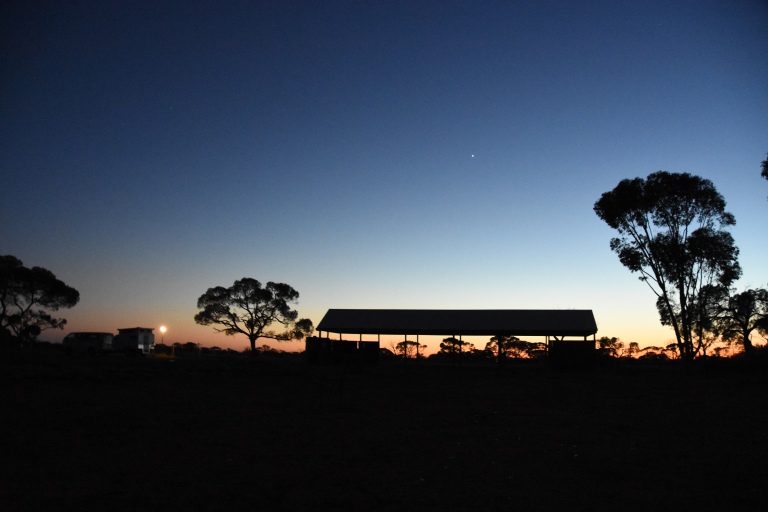 I almost forgot it was my birthday! Hayden reminded me and I told him that NO IT’S NOT MY BIRTHDAY SEE THE DATE ON MY WATCH until I realized my watch was wrong, oops. Happy Glendambirthday! It was a pretty uneventful birthday, but whatever I’m old and 22 now, all I want for my birthday is retirement investment money.

After practicing array standing until 8am, we practiced wheel swaps for a couple hours. People were put into teams of 4 and timed starting from getting out of the car to getting back in. During wheel swaps, the flies started to emerge along with the heat, and then were followed shortly after by mosquito nets. The flies were irritating but manageable with our handy-dandy nets. Hayden wore a super cool wide-brimmed hat with his net.

Jamie announced that we would have some free time to hang out, then 30 minutes later our solar car registration came through and NEVERMIND GUYS it’s time to drive the solar car! We were given enough time to pack up and then we were on the road doing controlled speed runs. On our way out, we saw Michigan rolling into our campervan park, and then a little later on our convoy bumped into them on the road!

Our convoy followed their convoy into Glendambo and then set up camp next door to one another. All in all, Glendambo hasn’t been so bad, other than the lack of free drinkable water. Tomorrow we are test driving to Coober Pedy, where I have been promised there will be more exciting things.