Sorry for not blogging yesterday! I was feeling a little under the weather and took a half day to rest, then headed to VW to meet up with the team and continue working. While outside applying vinyl to the convoy vehicles, a bunch of motorcycles suddenly sped down the street, followed by four classic cars that all proceeded to do epic burnouts for the sake of burning rubber. A wedding party exited from the vehicles and viewed the spectacle of burnt rubber. It appears that there is a business that performs the service of doing burnouts for wedding parties in front of an aesthetic warehouse that happens to be across the street from our VW base. The service apparently comes with quadcopter documentation as well. The party was so loud that the entire team working inside heard and rushed out to get a look.

The hired drivers were very proud of their cars. In Australia, there has been a very distinct lack of oldie hot rods and just cool cars in general. Additionally, there are speed cameras EVERYWHERE, so the “speed limit” actually means the limit of the speed here. What’s the point of having a cool car if you can’t even accelerate a little? Unsure what the locals think about all this. But anyway, these classic cars had to be imported and then converted to left-hand drive, and I guess that’s a big deal in Australia.

The wedding party didn’t stay very long and, shortly after they’d departed, another wedding party arrived in different cars to take their place! The second party was a lot less aggressive about the burnouts (perhaps this company does burnouts by request only), and things quieted down from there. 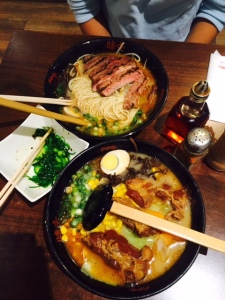 Later that evening, the team split up to eat dinner out, so Hayden and I went to a nearby ramen house (my pick). It was actually Hayden’s first time having non-Top Ramen ramen. He commented, “wow, first time, wow.”

One thought on “Burnout Wedding”